Nicola Sturgeon, the SNP leader, has responded to the criticisms that I and others have made of the Scotish Growth Commission's report that her government commissioned. In a twitter thread she said this yesterday: 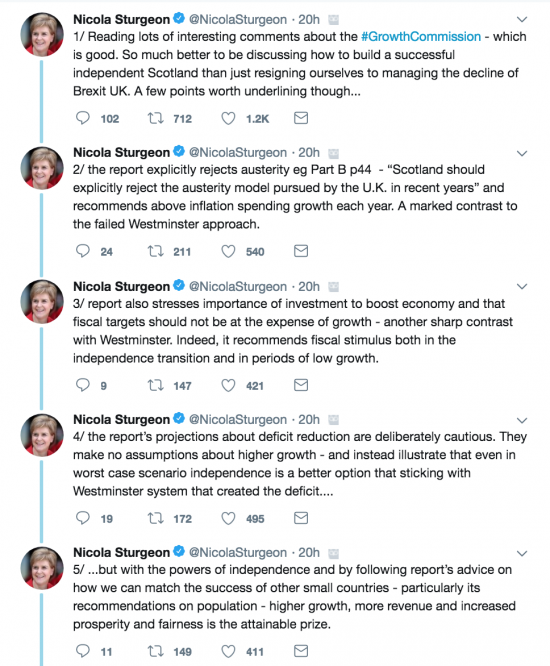 That I know of no one is disputing that the Commission report says these things. As I noted in my own first review of it, I got some way into it with a generally positive attitude towards what it had to say until I came to the crushing points that are the basis for my criticism of it.

My point, and that of others, is that you can argue you are in favour of investment and you can argue that you are opposed to austerity but that you cannot do so and simultaneously say you will impose a balanced budget constraint; seek to reduce the scale of the deficit; impose a spending cycle limit on borrowing for investment and forego any control of monetary policy and pass it to the whim of another state by adopting its currency, quite probably against its wishes.

I am happy to share Nicola Sturgeon’s sentiments. Her wishes for Scotland are appropriate, I think. But to achieve them equally appropriate policies have to be adopted and no country could achieve her aims without adopting its own currency, and choosing to pursue its own monetary and fiscal policy. The Growth Commission has instead chosen to give the government of a supposedly independent Scotland no greater economic power than the devolved administration already has in this area. Right now it manages a budget constrained by London and under the Growth Commission proposal that is exactly what it would still have.

Strong words won’t do as a rebuttal for this criticism. Debate requires an open mind and a willingness to accept there are alternatives. The Growth Commission got this issue wrong. At some point Nicola Sturgeon will have to admit that or IndyRef2 is doomed from the outset.