I suspect that quite a lot of readers did not get to section 10 of my blog on why shares are overvalued, published yesterday. It did, however, include the most important arguments in the whole post, touching on issues that have only recently occurred to me but which seem of some significance now I have noticed them.

Keynes still has value but too much of what is called Keynesianism has been tarnished by the neo-Keynesian school of thought that has been far too close to neoliberalism for comfort. And Keynes did not, in any event, foresee the end of the gold standard worldwide; the universal supply of cost free money created by sovereign currency issuing governments and the end of the shortage of supply of money as a consequence.

This new cost-free money supply has meant the effective near elimination of official interest rates as governments can no longer charge for what they can create for free, and at will. In other words, what Keynes could not have foreseen was the ending of interest rate policy as a mechanism for controlling the economy, although that is what has actually happened.

This fact is at the very core of the crisis we now face. We have an economy, and systems of economic management, plus policy for managing pensions, that are all built on the idea that because money is scarce interest must be paid for its use. But that is no longer true: money is not scarce. And its price, at least to government, reflects that fact: 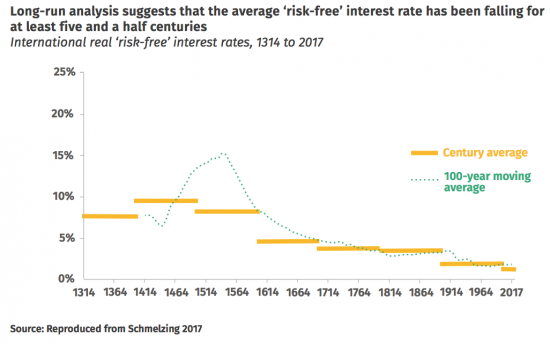 And this has widespread ramifications:

As the official price of money has fallen, so too have asset prices inflated. But that’s because money is still seeking what is, in effect, a risk free (or nearly risk-free) interest rate return when there is almost none to be had. This is true even in the case of equity investments: the number of these that actually fail is tiny.

This must change our thinking:

The fact is that then new economy has to be built on the basis that there is going to be little interest return. And what this means is that monetary policy is, and will remain redundant as a tool for macroeconomic policy management. The focus will now be on fiscalism; that is the use of spending and tax to manage the economy. There will be no choice: these will be the only tools we have.

I think this appreciation is the foundation for a new way of economic thinking. We can dispense with the old: free money has priced it out of existence.