There is a fascinating chart in the FT, from John Auher: 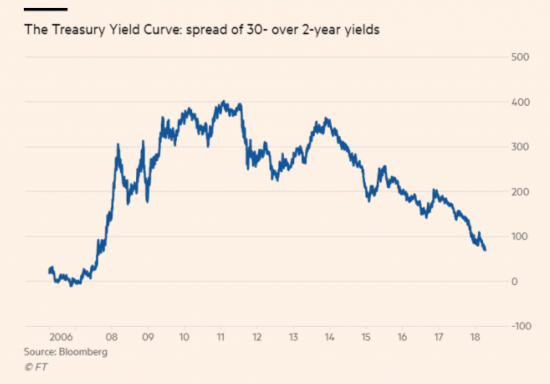 The yield curve [that shows the difference between expectations on long and short-term interest rates], is sending a clear message, however. The fear of a Fed mistake is increasing. The spread of 10-year over 2-year Treasury yields is almost back to a post-crisis low, while the spread of 30- over 2-year yields is indeed now at a post-crisis low: If expectations for interest rate rises for the next two years are growing, but not expectations for longer rates, the implication is that the market thinks that the Fed will indeed deliver rate rises, and go too far — leading to slower growth, and therefore lower yields thereafter.

I agree with him. The inflation that there is in the world rate now is short-term volatility that will work its way through the system without intervention. There is no inflation in sight that requires any central bank or fiscal policy action. Consumers simply aren't buying. In that case inflation cannot persist. But central bankers won't resist intervening. And in the process they can only make things worse.

Inflation is not the issue in today's economies. The failure of demand in the face of global and local crises from Syria to Brexit, as well as the destruction of economic certainty for many households because of market liberalisation, is what really requires attention. Pretending that the old concern of inflation is what matters now is like playing the fiddle as the ship sinks. But I expect the Fed and the BoE to be playing a duet on this, nonetheless.