The gender pay gap data works well, which is precisely why right-wing think tanks don’t like it

Data on gender pay gaps is now available. I think the Guardian summarised the situation  with this graphic: 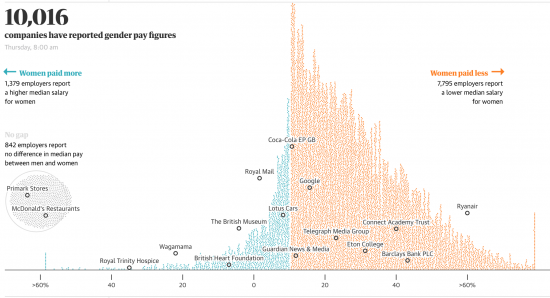 My position on this is clear: the concern is not just that women and men are not paid the same for work of equal value (vital as that issue is); the issue is also why women do not get the opportunity men get. The evidence is compelling that they do not.

This point appears to be lost on the right wing. A few days ago I blogged about comments from the Institute of Economic Affairs on this issue. They could not resist coming back on it. Julian Jessop, their chief economist has written a blog in response to my comments and those of Ben Chu in the Independent, under the title ‘Gender pay gap’ reporting isn’t fit for purpose in which he says:

Few can have failed to notice that UK companies with 250 or more employees are now obliged to report specific figures about their ‘gender pay gap’. Supporters argue that the data are helping to expose the disadvantages that many women face in the workplace. In my view, though, the system is failing.

For a start, the data are frequently misunderstood and misrepresented. Variations in hourly wages or bonuses between men and women are often interpreted – wrongly – as evidence of different pay for the same work. This sort of discrimination would, of course, be illegal. It would presumably be uneconomic too; if women were indeed willing to do the same work for less money, they would surely be over-represented in the highest paying jobs.

This is literalism gone crazy. What Jessop reveals is a belief that pay is the only thing that determines appointment. It does not, of course. The data is intended to make that clear. Jessop simply does not get that, saying:

One problem is that the data do almost always seem to be interpreted as evidence of unfairness in pay. The misleading ‘#PayMeToo’ hashtag is simply an extreme example of this.

He's right. It is interpreted that way. That's because there is no other way to interpret it.

In saying so let me be clear: Jessop is right that the data is not perfect. It does not handle part-time work well, for example. That does create an apparent bias, but only so long as you are willing to ignore the question as to why such work is more often done by women and be lower paid, which Jessop seems willing to do.

And this is my point: all data is produced for a reason. Let's not pretend that there is anything that can be considered neutral when it comes to accounting or statistics. What we measure is a matter of choice. How we measure it, and against what yardstick, indicates our values. What we do not measure does the same thing: it says that the issue that has not been measured does not matter.

No one should believe that this data was ever intended to be neutral. This data was created to produce change. And in the process, and against opposition, a metric for reporting was agreed. It is not perfect, but what matters is whether it achieves a purpose or not. The purpose is at least sixfold.

First it is to demonstrate that there is an issue. It does that.

Second it is to demonstrate that the issue is significant. It also does that.

Third it is to demonstrate that the situation need not exist i.e. that the problem is not pervasive. It also does that.

And it was to demonstrate that there are employers who have serious issues to address by embarrassing them into reaction. Again, it does that.

Sixth, it is intended to promote broader awareness. Again, it has achieved its goal.

No one says that the data is perfect.

No one also said that a company could not go beyond minimal reporting to explain what it was doing.

But if, as we would hope (and as Jessop agrees should be the case) companies are paying equal pay for equal work then the data has to reveal that women are not getting access to equal work. That is pretty much the only possible explanation. Assuming (and I, of course, do) that women are just as able as men then the data reveals a real issue.

It may not do it perfectly. I accept that. But even in its imperfection - and all data is imperfect, because the price of perfection is too high and anyway because of varying circumstances and systems perfection is impossible to achieve, ever - the data achieves its goal.

So why does Jessop object? Either because he thinks that gender is not an issue - as my second quote from him suggests by implying price is the only issue of concern in appointments. Or because he is suggesting women do not want certain sorts of work, which the same quote implies in my opinion. Or because he simply does not agree with the premise for the collection of the data. In other words, he simply denies there is an issue to be addressed here, when the sole reason for the data existing is that others believe there is an issue. He is arguing the data is flawed, in other words, because he does not agree that it ever needed to be collected. And how do I know that is true? Because he says:

Ideally, then, I’d argue that the gender pay gap reporting should be rolled back. Dropping them completely may not be realistic. But the government could reduce the frequency of reporting, currently annually, perhaps to once every five years. This would cut the compliance burden and discourage short-term measures to manipulate the data. In the meantime, the government should refocus on tackling the disadvantages that some women undoubtedly face – such as the availability of affordable childcare – rather than demonising employers.

This is the Institute for Economic Affairs showing its true colours. They think poor, oppressed, employers really should not be asked to have to address this issue. To achieve that they want to cut off the data.

But data is politics and the IEA know that. What they make clear as a result is that they do not want the gender pay gap to be addressed. To achieve that they want the data suppressed for spurious reasons. And that's precisely because it tells a story they do not like. Which is precisely why this data works, and works well.