A reader of this blog, who to protect her identity shall be known as Janet, wrote to her MP about the John Redwood revelation that the deficit was no big deal that I published earlier this month. The MP in question wrote back: 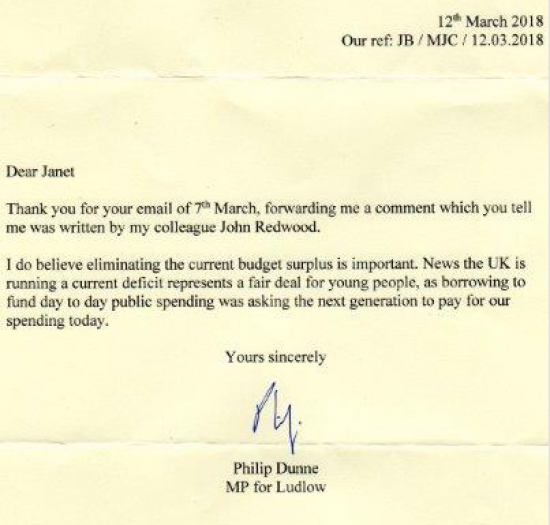 There it is: confirmation if it were needed that the debt is borrowing that must be repaid at cost to future generations even though £435 billion of quantitative easing proves otherwise and we have never repaid public debt, or attempted to do so, because the truth is that this would destroy the money supply.

Philip Dunne needs to read the House of Commons library briefing on quantitative easing that includes phrases like:

Under QE, the Bank creates money which it uses to buy assets (mainly government bonds). This increases the amount of money in the economy.

It's sad to say that Redwood gets this. Dunne doesn't. It must be tough to find yourself behind Redwood in class.

The fact is that the national debt is just part of the money supply: that's why our cash  (notes and coin) is included in it. And the money supply comes and goes as the economy requires it. But the one thing that does not happen is that it is paid for by the next generation. And I'll tell you how I know that. If they did repay it all then there would, paradoxically, be nothing left to pay it with. Which is very good reason why they won't and actually, can't do what Dunne says.

Mr Dunne clearly needs a new excuse for austerity. No doubt he will find one. But this one has really run out of road.