The end of the Union?

In her speech on Brexit yesterday Theresa May said:

As we leave the European Union, we will forge a bold new positive role for ourselves in the world, and we will make Britain a country that works not for a privileged few, but for every one of us. That pledge, to the people of our United Kingdom is what guides me in our negotiations with the EU.

Pardon me for having my doubts. I'll concentrate on just one. May said

[I]n doing all of these things, it must strengthen our union of nations and our union of people. We must bring our country back together, taking into account the views of everyone who cares about this issue, from both sides of the debate. As Prime Minister it is my duty to represent all of our United Kingdom, England, Scotland, Wales and Northern Ireland.

Oh really? Do the Scots and Welsh know that? They're preparing legislation to challenge what May's doing. But let me turn to Ireland, as I have before, and to Sean Danaher on Progressive Pulse, as again I have done before.

Our departure from the EU causes very particular challenges for Northern Ireland, and for Ireland.

On that we can agree. She added:

We have ruled out any physical infrastructure at the border, or any related checks and controls.

Except that not being in a customs union and not being in a single market means there must be controls. What is more, if there aren't any in Ireland WTO rules say there can't be any anywhere: those rules demand a level playing field. But May added:

But it is not good enough to say, ‘We won’t introduce a hard border; if the EU forces Ireland to do it, that’s down to them’. We chose to leave; we have a responsibility to help find a solution.

Which is useful only in the sense that it says to all those who make the trite suggestion that this  is the case have been kicked into touch.

But then she said:

Just as it would be unacceptable to go back to a hard border between Northern Ireland and Ireland, it would also be unacceptable to break up the United Kingdom’s own common market by creating a customs and regulatory border down the Irish Sea. My personal commitment to this is clear. As Prime Minister of the whole United Kingdom, I am not going to let our departure from the European Union do anything to set back the historic progress that we have made in Northern Ireland — nor will I allow anything that would damage the integrity of our precious Union.

So, no borders then. But no customs union either. And no known technology that can deal with this scenario. And a border that has a massive history of smuggling on it that 20,000 British troops could not stop, as Sean points out, plus a border country that is utterly opposed to the idea of any border control at all, as the political map shows (again, thanks to Sean): 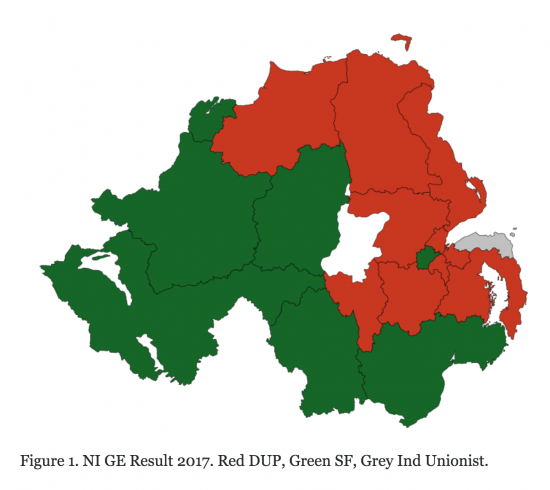 Every single part of the border has a Sinn Fein MP.

Let's be blunt about this. May is still in fantasy land then.

To control abuse the EU will have to erect a border. Otherwise anything could flow from the UK uncontrolled - and you can be sure some would try to do it.

And there is to be no border in the Irish Sea to prevent that.

And no technology is available to run a seamless border.

So to be blunt, all options actually remain off the cards according to May, apart from the default of hard Brexit.

I agree with Sean, the mix that this provides is totally unpalatable. He says:

Some months ago there appeared to be a number of options but it seems increasingly likely that there are now just two: a Hard Brexit or no Brexit at all. No Brexit is obviously close to the Status Quo but may be politically impossible. For Northern Ireland a Hard Brexit will likely produce a majority for a United Ireland.

The view south of the border will not be overwhelming joy but likely a dutiful acceptance that it needs to take NI on. I have argued that reunification might more resemble Cyprus than Germany but ultimately I think they will bite the bullet. There are two issues — economic and political.

The political difference is even more of a worry. The DUP voting Unionists are not well understood by the Southern Irish and there is a worry of civil disobedience or even renewed terrorism.

His conclusion is this:

To summarise: the prediction is either No Brexit or a United Ireland by its hundredth birthday in 2021.

I actually think it may well be the first, followed by the second.

And the same for Scotland.

May might cap Cameron as the PM who contributed most to the break up of the UK. And if Northern Ireland goes - as I think it may well do - then the end of much of the Union is likely.

So much for claiming to be the PM for the whole country. 'What country?' might well be the question to ask.