It is really quite staggering how wrong Chris Giles, the FT's economics editor, can sometimes get things. A comment piece from him this morning is a perfect example.

The context is the fact that, as Politics Home note:

The Office for National Statistics said the Government had eliminated the deficit on its day-to-day budget - the target originally set by the former Chancellor when he took office in 2010.

The boost to the country’s finances meant the Treasury was in surplus on the 2017 budget, when excluding capital investment.

And what does Chris Giles argue as a result? It is this:

The improvement in the public finances ought to make us question whether the tight squeeze on public spending should now be eased. Healthier than expected tax revenues are by far the most important foundation of the improved public finance outlook.

In a nutshell, that is the FT’s economics editor saying the household spending analogy must apply to the government’s finances.

Fisk that and the suggestion is, first that money must be raised from tax before we spend.

And, second, unless we tax we cannot spend (the article contains the usual ‘mountains of debt’ nonsense).

Third, in the process Giles ignores the whole logic of the counter-cyclical role of government spending in the economy, where it is intended to stimulate when all else refuse to spend. Bizarrely, he actually says:

If evidence were needed that Gordon Brown was wrong when saying the era of boom and bust was over, then this is it. The whole logic Giles has to offer is that government should spend in good times and cut in bad, exacerbating everything about boom and bust in the process.

As bad, he thinks that because the piggy bank balances (and such is the absurdity of what Giles has written that to refer to childhood money management techniques is entirely appropriate) we can spend more without any risk of that ‘nasty borrowing’. The debt obsession continues when debt is nothing more than the sum of private savings. What has he got against those?

I am aware that Giles went to the FT from the Institute of Fiscal Studies, and notoriously they ‘don’t do macro’, but for an economics editor to reveal quite so brazenly that he thinks that the Treasury should act as if the economy is a household is staggering.

Now, don’t get me wrong. I happen to agree that we do need more government spending. But let me be clear. This is not a matter that need be decided upon on the basis of whether or not there is sufficient tax to pay for it. The decision criteria is simply is there need, and are there unused resources that could meet that need? If the answer to both is yes then the spend is necessary and a responsible government should undertake it, knowing that the boost to the economy that will result will return the spend to the Treasury by way of additional tax yield in due course: that’s what the  multiplier does.

I explain more on this issue here.

But please note: just about every element of Giles’ thinking is wrong and reveals a lack of knowledge of how the macroeconomy works. When the FT can employ people to make such elementary mistakes no wonder we are in trouble as an economy. 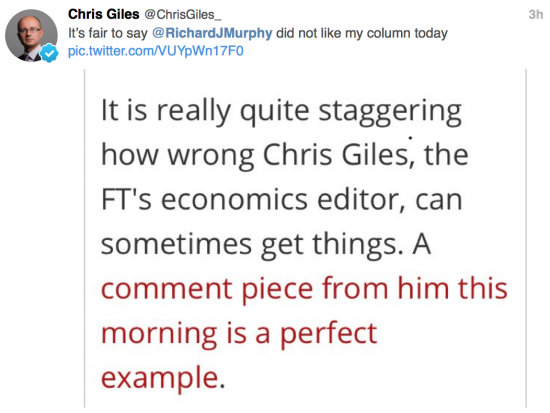