Who is culpable of the greater error of judgement: Oxfam or Jeremy Hunt?

I’m meant not to be blogging and to be concentrating on a few days off, but since stopping thinking is like stopping breathing, I noticed a truly excellent blog by Simon Wren-Lewis yesterday that compared Oxfam’s supposed failings with those of the government over the NHS. 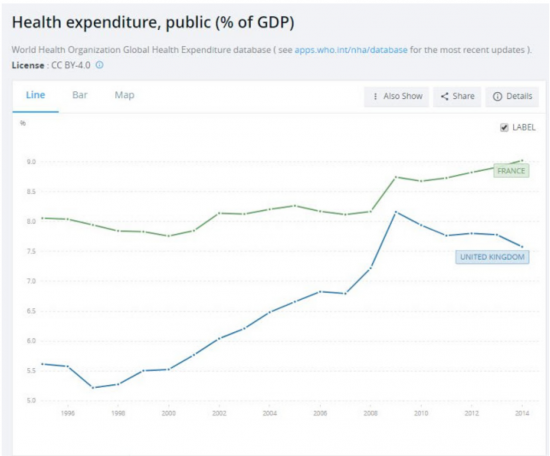 Contrast the behaviour of politicians and the media in relation to what is currently happening in the NHS. Quite simply people are dying because there are insufficient resources to cope with needs. Thousands have had operations postponed, leaving them in pain. Patients are lying in trolleys because there are not enough beds. Huge numbers, more than ever before, are having to wait for more than four hours in A&E.

The reason for all this is not mysterious. Health has been starved of resources by this and the previous coalition government like never before.

To which he adds:

This [chart] shows neglect on a scale that make the leadership of Oxfam’s misdeeds look trivial. Yet where is the media scandal? The man who has been in charge of the NHS while this has happened and is happening in front of our noses is still in his job. The government continues to fail to provide the resources the NHS needs, while promising to protect the NHS, and yet it has not been held to account for killing people and leaving them in pain by the same media that has been happy to pursue the leadership of Oxfam. The Minister for International Development told the leaders of Oxfam that “an organisation’s moral leadership comes from individuals taking responsibility for their actions”. Quite.

The rest is well worth reading, but I note this to theorise it in a way Simon doesn’t.

Simon is, I think, making a suggestion that both Oxfam and the management of NHS resources represent cases of negligence. But there is a difference.

Oxfam did not intend to be neglectful. And they certainly never condoned the actions of their staff. They have accepted responsibility. Long before publicity arose they were taking steps to improve matters.

Jeremy Hunt on the other hand has intended to deprive the NHS of resources. That is what the deliberately chosen and economically unnecessary policy of austerity means. He knew pain and suffering would be the consequence. He also knew it was within the government’s power to alleviate this situation, he has not argued that they should do so. He has sought to blame everyone but himself. He is still health secretary. And the neglect, pain and unnecessary deaths are continuing.

The difference in the situations is to be found in the legal concept of mens rea. This can be explained  as:

The intention or knowledge of wrongdoing that constitutes part of a crime, as opposed to the action or conduct of the accused.

Has a crime been committed? If crime is an affront to the accepted standards of society then, yes, that can be argued in both cases.

But to be found guilty of most crime mens rea has to be established; that is the intent to commit the act. This provides a simple but effective indicator of culpability here.

Did Oxfam have any intention to undertake wrongdoing? Clearly not. So they are not guilty of the crime. There worst misdemeanour is not being as candid as they might. They suffered an  excess of embarrassment that certainly clouded their judgement. That was an error, no doubt. But a crime? I still don't remotely think so.

In contrast, did, and does, Jeremy Hunt knowingly cause harm by his actions? The answer is unambiguously yes in my opinion. This is because there is amply evidence to suggest that alternatives are available; that he knows of them and does nothing to act on them. He is, then, guilty of causing pain and loss of life when both could be avoided. It is not just his judgement that has erred; his actions have been informed by that judgement despite knowing what would happen.

In this case it also makes clear who should not be standing in judgement.