May and markets crashing together is not a pretty prospect

John Auther in the FT is worth reading although it requires a premium sub to get to do so (paid for by my university, I might add), for which I am grateful. Today he argues:

US Treasury yields on Monday broke through what had long been billed as an important point of resistance, at 2.66 per cent, and rose above 2.7 per cent. That appeared to break the fabled long-term downtrend in 10-year Treasury yields: 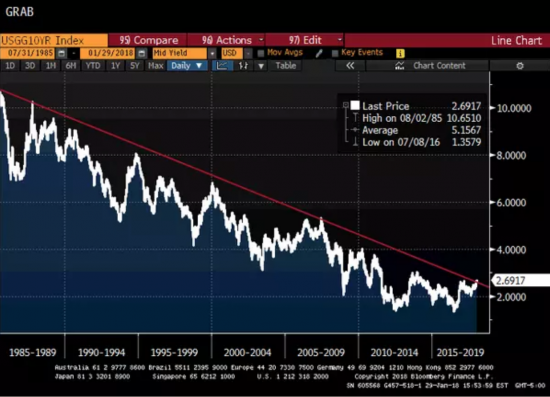 What he then argues, in essence, are three things. The first is that the other two peaks were just before crashes.

The second is that in each case the peak was because of a market euphoria, and he provides evidence that this is just what we are suffering from.

Third, the question is then 'when' and not 'if' there is what is politely called an 'adjustment'.

This matters to the world at large. Such 'adjustments' tend to impose substantial costs on society at large, which makes asking why we subsidise wealth so heavily entirely appropriate.

Third, in the UK any such adjustment might happen as the government itself is already in freefall. We could not be worse prepared for this. May and markets crashing together is not a pretty prospect but seems entirely plausible.