Beware GDP: it can be seriously misleading

I am reposting this from the Commonspace website, which is mainly targeted at a Scottish audience, who published it yesterday afternoon:

ECONOMIC EXPERTS Professor Richard Murphy and Dr Craig Dalzell have joined the Scottish Green Party in responding to the latest Gross Domestic Product (GDP) figures by arguing that better measures are needed if the true state of economic wellbeing – felt in the pockets of the population – is to be reflected.

The Scottish Government published the GDP figures for the third quarter of 2017 on Wednesday, which indicate that the Scottish economy grew by 0.2 per cent in real terms compared to the previous three months. Compared with the last three months of 2016, the economy has grown by 0.6 per cent.

The GDP per person remained the same, with zero per cent growth.

The Scottish Government has presented the statistics as positive due to the overall growth, while opponents in Labour and the Conservative Party have criticised the SNP for allowing Scotland to “lag behind” the rest of the UK, where GDP since the final quarter of last year has grown by 1.7 per cent. 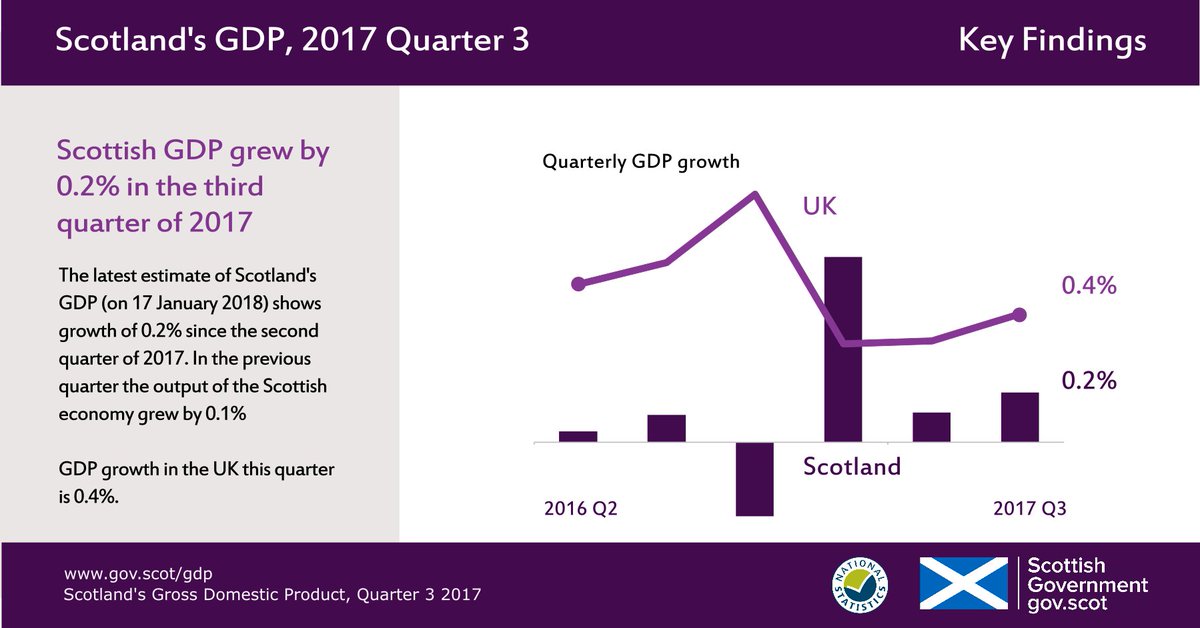 However, GDP is far from universally accepted as the most effective measure of economic growth, for a number of reasons.

Speaking to CommonSpace, political economist and tax expert Professor Richard Murphy suggested that both the accuracy of the data, and its usefulness from the perspective of how the economy is impacting on people’s wages, are dubious.

Murphy said: “There will, no doubt, be those saying that low GDP growth (and none in terms of GDP per head) is bad news for Scotland. This, though, assumes that, first of all the GDP data is right, and second that GDP matters.

“There is no way we can be sure that the GDP data for Scotland is right because the calculation of GDP requires accurate data on imports and exports from Scotland and all experts agree that Scotland does not have that information.

“I have my doubts about this and explained why to the Scottish Parliament last year. I suggest that it would be wise to share my suspicions.”

Murphy argued that there are other measures which would better reflect how well the economy is doing in tangible terms: “We now know that GDP is a poor indication of well-being. In particular, the share of wages in GDP has been falling steadily over time whilst that of profits has been rising.

“It is the increase in profits that have pushed up UK GDP as a whole - reflecting the activity of the City of London - whilst real wages have been stagnant or falling when adjusted for inflation. If you want to know what is really happening in Scotland look at employment data, average wages and changes in them, and how this data compares to the UK.

“The Scottish Government would be wise to adopt increases in median pay as its economic goal and stop worrying about the nearly meaningless Scottish GDP measure that is beloved only by those who do not seem to have the best interests of Scottish people at heart.”

The left wing and pro-independence think tank Common Weal has long advocated for economic measures which better represent a progressive approach to the economy, arguing that GDP “tends to reinforce the interests of corporations” and drive a policy focussed on improving short term profits.

Head of research at Common Weal, Dr Craig Dalzell, spoke on the subject before the Economy, Jobs and Fair Work Committee at the Scottish Parliament on Tuesday. He explained his view to CommonSpace: “Since the 2008 Financial Crisis there has been a significant decoupling between GDP and wage growth.

“Where wages used to rise in line with GDP, they have been flat or declining in real terms for the past decade with the difference being largely pocketed as company profits or sent overseas.

“The government would be well advised to focus as much on inclusiveness in the economy as they do on growth in and sheer size of overly simplistic measurements such as GDP.”

This view was reflected in the Scottish Green Party’s response to the latest figures. In contrast to the other opposition parties’ suggestion that GDP ought to have been higher, Scottish Greens co-convener Patrick Harvie was critical of the measure itself.

Harvie said: “GDP gives a very limited insight into our economy, when the real figures we should be focusing on are stagnant wages, persistent poverty and the failure to promote low-carbon capital investment.

“More equal societies have successful economies, so if we’re looking for a brighter future, we should be prioritising investment in local services, fully funding an inflation-based pay rise for frontline workers and bringing forward infrastructure spending on sustainable transport, housing and energy projects.”