May caves in to Ireland, but now the battle moves to the home front

Reports have it that Theresa May has conceded all that Ireland demanded of her this morning. According to the Guardian:

According to sources, MEPs were told by the chief Brexit negotiator, Michel Barnier, that Theresa May had conceded after days of intense talks that the province would be treated as a special case with “continued regulatory alignment” between the north and south of the island after Brexit.

A draft of the text of a 15-page joint agreement between the European commission and the British government is said to include a commitment in paragraph 48 that “in the absence of agreed solutions the UK will ensure that there continues to be continued regulatory alignment” with the internal market and customs union.

Please don't get me wrong: I am delighted if that is the case. But let's be under no illusions here. May has conceded to those she has to appease in the next day or two to get trade talks started, but there's no way that this issue is resolved. The issues her concession raises are enormous. These are my tweets in response to the news: 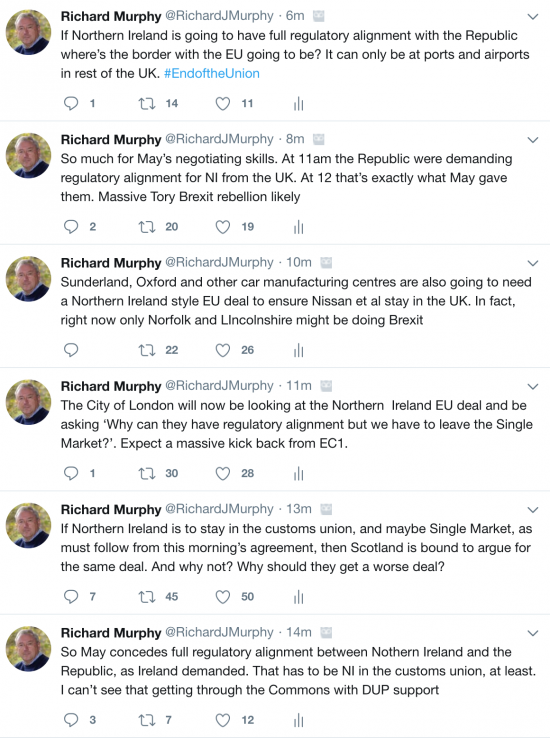 Banter apart, these are the issues:

And then there is the politics:

All of which suggests, as I said this morning, that May has solved nothing at all. She's just won a tiny bit more time.

But in that case Labour has also to get nearer to the point where it says where it stands. It has to say:

As I previously predicted, Ireland is now where the Union, with with Europe and within the UK, can be saved or broken. Nothing has changed. Thats still true. But the fault lines are now more stark than ever and the battle to come more obvious.

And there is still a solution, of course: we could go the Norwegian route. Candidly almost nothing else works now. But I can't see May delivering it without Labour support, and is that what they want to do? And if so, why?