Austerity has succeeded in its aim: the lives of a few have been enriched at cost to hundreds of thousands more now living in poverty

Hundreds of thousands of children and older people have been plunged into poverty in the past four years, according to a stark analysis laying bare the challenge to families trying to keep up with the cost of living in Britain.

[New] research from the Joseph Rowntree Foundation (JRF) found almost 400,000 more children and 300,000 more pensioners in the UK were living in poverty last year compared with 2012-13, the first sustained increases in child and pensioner poverty for 20 years. The foundation warned that decades of progress were at risk of being unravelled amid weak wage growth and rising inflation.

We already know the UK's NHS cannot deal with the crisis it is facing because of the ravages of austerity and unnecessary deaths are resulting.

Now we know that the lives of hundreds of thousands are also being blighted by austerity. And the trend is deeply worrying: 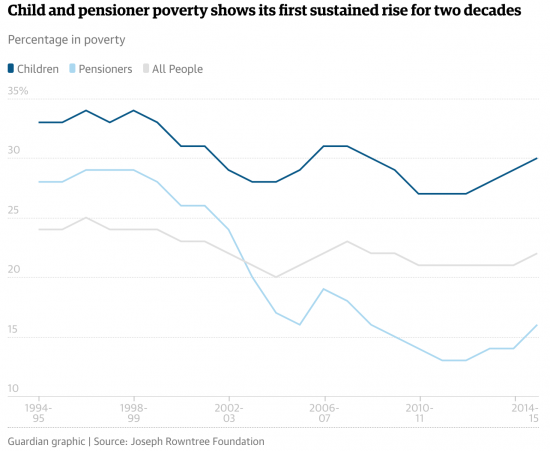 Those of us who campaigned against austerity always said it was wholly economically unnecessary and so instead had the primary aim of shrinking the size of government to suit the whims of the wealthy at cost to those dependent on the state. And so it has proved. To ensure that the UK's largest companies and wealthiest people are sitting on hundreds of billions of funds they have no idea what to do with hundreds of thousands of people are living lives of completely unnecessary poverty.

If we had a court for economic crime I would charge George Osborne and David Cameron.

But let's be clear that May and Hammond have done nothing about it and so are equally culpable.

It's time to face the reality that we live in a country which has decided that many lives do not matter so long as the lives of a few are, literally, enriched.

Austerity has succeeded as Osborne and Cameron planned. But the price is enormous. And don't forget it includes political populism. Those who have been deliberately mistreated don't tend to forget it.