Austerity will cost a million lives of which 120,000 have already been lost

Danny Dorling, who is Halford Mackinder Professor of Geography, University of Oxford and Stuart Gietel-Basten, who is Associate Professor of Social Science and Public Policy, Hong Kong University of Science and Technology, wrote a blog post for the Conversation and Brave New Europe, from which I reproduce the following part:

The stagnation in life expectancy [in the UK] is no longer being treated as a “blip”. It is now projected to be the new norm. But the ONS does not explicitly state this in its projections for the future. To calculate the figure of a million lives lost you have to subtract all the future deaths now predicted in the 2017 report, which was based on data from 2016, from those projected two years ago, based on a 2014 projection.

Every year up until at least the year 2084, people across the UK are now expected to die earlier. Already in the 12 months between July 2016 and June 2017, we calculated that an additional 39,307 more people have died than were expected to die under the previous projections. Over a third, or 13,440, of those additional deaths have been of women aged 80 or more who are now dying earlier than was expected. But 7% of these extra deaths in 2016-17 were of people aged between 20 and 60: almost 2,000 more younger men and 1,000 more younger women in this age group have died than would have if progress had not stalled. So whatever is happening is affecting young people too. 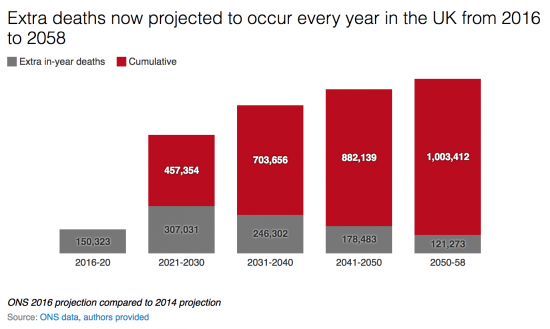 The projection that there will be a million extra deaths by 2058 is not due to the fact that there will simply be more people living in the UK in the future. By contrast, the ONS now projects less inward migration. The million extra early deaths are not due to more expected births: the ONS now projects lower birth rates. The extra million early deaths are simply the result of mortality rates either having risen or having stalled in recent years. The ONS now considers that this will have a serious impact on life expectancy in the UK and population numbers for decades to come.

The argument they make is clear. As they put it:

Whatever has happened it is not a sudden worsening of the healthy behaviour of people in the UK. It is not a sudden rise in obesity or some additional carelessness about looking after ourselves. Neither obesity nor any other human behaviour linked to poor health such as smoking or drinking alcohol has seen a sudden rise. In fact, health complaints from smoking have plummeted since the introduction of the 2007 ban on smoking in public places. The number of Britons who smoke is at its lowest level.

The proportion of adults who drink alcohol in the UK is also currently at its lowest level since 2005. Obesity is still rising, but it has been for decades now, and the age groups now dying in high numbers — the over 80s — are not yet those who became obese in recent decades.

The most likely culprit, by far, is austerity, including the effect of the cuts to social and health care services.

We will not live longer by all taking responsibility just for ourselves alone, looking after just us and our families, trying to get fitter, eat better and worry less. This is not how the health of whole nations improves. It is about all of us, not just one of us. That is why it is a million years of life. And we should not allow that million to be announced quietly, like the inevitable dying of the light.

As we argue in our new book, demography is not destiny. Projections are not predictions. There is no preordained inevitability that a million years of life need be lost, but already, 120,000 have been by 2017.

The rest of those million early deaths could be avoided. There is no biological reason why life expectancy should be so low in the UK compared to almost all other affluent nations. The social sciences and epidemiologists between them have the answers, but only through politics comes the power to make the changes that are now so urgently needed.

Let me put it another way: austerity is going to cost a million lives.

And I say that's a price not worth paying when there is no reason at all for a government to balance its books.