I am not sure of the origin of this table, which was posted on my Twitter timeline yesterday in response to my blog on devolved Scottish taxation, but it has the feeling of being completely credible: 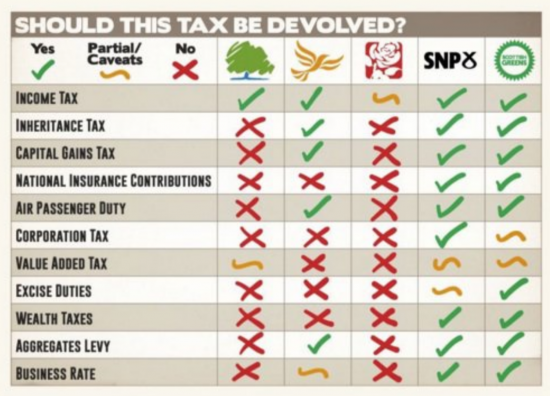 I spoke on Wednesday to SNP MPs about the importance of an independent currency, which is the condition for full fiscal autonomy in any debate on the future of Sottish taxation. This thinking was based on my White Paper on Scottish Taxation produced for Common Weal.

What I also stressed  is that is vital that at present Scotland has sufficient devolved powers to manage the economy within the country as things now stand since, increasingly,  this is the task expected of the Scottish government. But, to put it bluntly, it's being given tools little better than those offered to a local council to achieve the task and that is absurd.

As I have explained repeatedly on this blog and elsewhere, government spending is not funded by tax. It is effectively funded by government creating new money in the form of promises to pay (which is why a promise is printed on bank notes), which promise is cancelled either by the government accepting back the cash it created in payment of tax or by the issue of debt to the market (which simply defers the promise from the present to the future because right now the government has decided to not tax enough to fulfil the promise by demanding tax payment). What this means then is that tax is not, as such, an instrument for funding, but is the balancing mechanism in the system of fiscal management of an economy where government spending is balanced by tax paid, changes in the level of borrowing and changes in the level of money creation (or QE, as things stand at present). Only with this whole range of powers being available to it can a government hope to manage the economy.

The trouble is that Scotland is not being given any significant borrowing powers over borrowing. Nor is it being given any powers over money creation, or QE, at all. And it is only being given very marginal powers over tax. This is because some very minor taxes apart, just part of income tax is really being devolved (ignore the VAT rules: they are just a ruse to undermine the Barnett formula). And as I noted yesterday, even those powers that are devolved are booby trapped.

The result is that any Scottish government will fail to deliver an economuc policy for the country at present. It is not possible for it to do otherwise. This is not an SNP or nationalist issue. I take seriously the intentions of other Scottish political parties to take power in Holyrood, alone or in coalition. And they too are doomed to fail, except that in their case they seem committed to the cause that dooms them to failure because they don't even want the range of taxing powers that might help them achieve their goals to be available to them.

I cannot stress sufficiently how important this is. The UK already faces an existential crisis as a result of Brexit. It might face another if devolution, which has supposedly been embraced by all major parties, fails to deliver. One existential crisis is enough for any state to handle at a time. The failure of devolution could create untold stresses at the same time. And that worries me, profoundly.

Those who thought they'd grant devolution to ensure Scotland (and in turn Wales and even the mayoralties) failed might have thought, in the student union political way that far too much UK politics is conducted, that this was a 'fun' thing to do, but the consequences for millions of people whose well being is deliberately intended to be left behind as a result whilst the vestigial wealth of the south east of England continues to accumulate are deeply significant. And eventually that consequence is also unacceptable.

Quite how this will pan out is uncertain. But if those with any degree of concern for Scotland, Wales and the English regions want to better understand how to deliver for the people who live there then they need to better understand that devolving powers over tax, borrowing and money creation has to be part of the equation or the demand that devolved governments produce stimulus by shifting funds within spending budgets whilst watching their tax revenues being undermined by design will result in economic, political and social backlash that will be deeply uncomfortable.