There seems to be no link between competitiveness and tax rate

A long time colleague, and one-time co-author, Francis Weyzig, has published some interesting research on his blog. As he says:

The Netherlands just joined the race to the bottom in corporate tax. Repeating the mantra that lower tax is good for the investment climate and necessary to remain competitive, the new government cheerfully leaked that it will reduce the rate from 25% to 21%.

But as he then notes:

The facts show that corporate taxes are irrelevant for a country’s competitiveness.

Surprisingly, current tax rates on profits, or indeed the higher rates from a decade ago, do not matter at all.

What't the evidence? He offers it in the form of this chart: 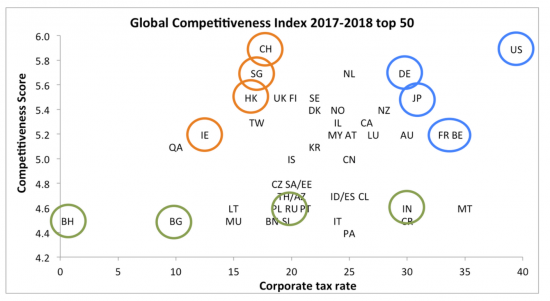 The graph shows the top 50 countries in the Global Competitiveness Index. This index is constructed by the World Economic Forum, where there’s no lack of insight about what makes an economy competitive. The countries are shown by their Internet codes, for example DE is Germany and CH is Switzerland. The higher a position of a country in the graph, the higher the competitiveness score. The horizontal axis shows the total corporate tax rate, from zero-tax Bahrein on the left to a 40% average rate for the US on the right.

And the conclusions are surprising, even for seasoned tax campaigners:

The orange circles mark some of the highly competitive discounters: Switzerland, Singapore, Hong Kong and Ireland. These are often mentioned as evidence that low tax and a good investment clime go hand in hand. However, now look at the blue circles. These are notorious high-tax countries: the US, Germany, Japan, Belgium and France. Their competitiveness scores match strikingly with those of the low-tax group! Thus, countries with tax rates 15% or more apart offer an equally attractive investment climate.

The green circles are even more stunning. They mark four countries in the top 50’s lower ranks with similar competitiveness scores: Bahrein, Bulgaria, Russia and India. The tax rates of these countries, by contrast, are very different: exactly 0%, 10%, 20% and 30%. Of course, tax rates do matter. Yet the graph clearly shows that they are irrelevant for a country’s overall investment climate.

The truth is that there is no need for any country to copy the misguided policy choices of its neighbours. It is in a country’s own interest to refuse joining the race to the bottom on corporate tax, and instead focus on those competitiveness factors that really matter. Occasionally those factors may include taxes. Far more often, they do not.

NB: Linked with permission from Francis.