Beating Amazon on tax is vital: it’s about shaping the society we want to live in

The tax affairs of large US companies operating in Europe will attract a lot of attention today. It is expected that the EU will publish a ruling against Amazon. The implications of the ruling, which is technically on a transfer pricing issue, will be clear: Amazon will owe more tax.

The case against Amazon is summarised here. The argument revolves around this structure: 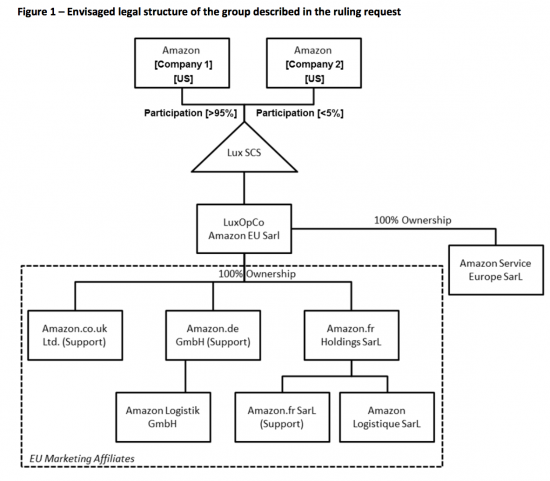 The US companies own their interests offshore. They in turn own a 'tax transparent' Luxembourg company 'SCS', which owns the rights to the US generated software that drives the Amazon platform. That tax transparency means that SCS is not taxed in Luxembourg but where its members are. Because of the US tax system that has to date, in effect, not taxed overseas earnings not remitted back to the USA, SCS is effectively untaxed.

The rights SCS owns are licensed to a Luxembourg tax resident company, Amazon EU Sarl. Sarl had a transfer pricing agreement with SCS, approved by Luxembourg, that in effect meant that all the profit flowed back to the SCS and so offshore and so became untaxed. The challenge that the EU will consider today is whether that price from Sarl to SCS was fair. And it is thought they will say it was not and as such Sarl has much more profit and so a tax liability. The likelihood is that Luxembourg will object, just as Ireland is objecting to collecting tax from Apple.

That's the technicalities. What are the issues? There are several. First, this is a structure created soon after the turn of the century. To be candid, it's blatant, aggressive and very obviously created with one goal in mind. And back then no one thought anyone would have the temerity to challenge it. Times have changed. I doubt anyone would try a structure quite as blatant as this now. Let's celebrate progress.

Second, let's bear in mind Trump's proposed US corporation tax reforms. These will lock in all Amazon's gains: they have everything to fight for. The evidence is clear that the EU is far ahead in terms of tax justice. International cooperation with the US on this issue still remains a dream. The UK Brexiteers might want to bear this, as well as Bombardier, in mind when negotiating with them.

Third, if there was no transfer pricing arrangement this problem would go away: a unitary tax system that would allocate profits to where sales, people and tangible assets are located would long ago have solved this problem.

Fourth, if country-by-country reporting had existed back then (and the idea was only created in 2003) then the issue would have become apparent a lot sooner: transparency matters in solving tax issues, in other words.

Fifth, the need for cooperation on tax is apparent. In global markets states have to work together to collect tax owing. I am often asked what the merits of the EU are. This is one of them. And I applaud it for it.

Last, the culture that created this has to be rooted out. This is not about competition. Nor is it about free markets. It is not about capitalism. It is about abusing regulation to eliminate competition, establish monopolies, deny responsibilities and eventually suppress market entry. It is the antithesis of what is being lauded by those who say they believe in markets. I do not however expect to hear them condemning it.

And all this matters: it shapes the world we really live in. In the Joy of Tax I said tax systems are the mechanism best able to determine the type of society we have. Beating Amazon on this helps create effective markets and real choice. It's vital that the EU win this case.