It really is time to put money to work

Where did QE money go? There's been over $4 trillion of it created in the USA, which the Fed is now planning to unwind at a rate of £10 billion a month in what could, at that rate, see it take more than three decades for the programme to come to a close.

But the question the FT asks this morning is where all that QE money went. And the answer is pretty simple. It went into making new money. And large parts of that were not spent. This is the rise in the value of non-interest earning deposits in the USA over the last couple of decades: 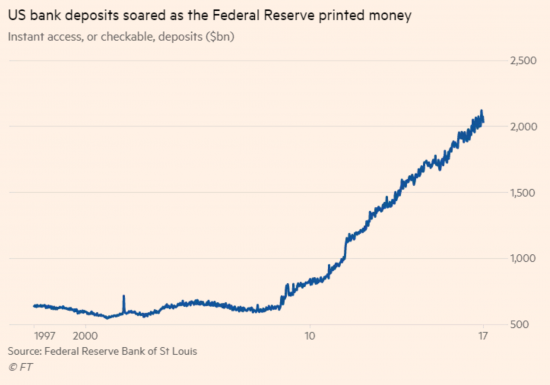 That is $2 trillion on non-interest earning accounts right now because those with wealth have no idea what to do with their money. That's a pretty staggering statistic.

Whilst the Fed wants to use this money to reduce the scale of its balance sheet without actually adding anything to economic activity in the process.

And all the time what is needed is more state investment to build a better America, for which purpose $2 trillion could achieve quite a lot.

It really is time to put money to work.