Growth, but not as we’ve known it, is an issue we have to face

The IPPR Commission on Economic Justice interim report includes much useful data that is well presented (which is crucial). I though this chart telling: 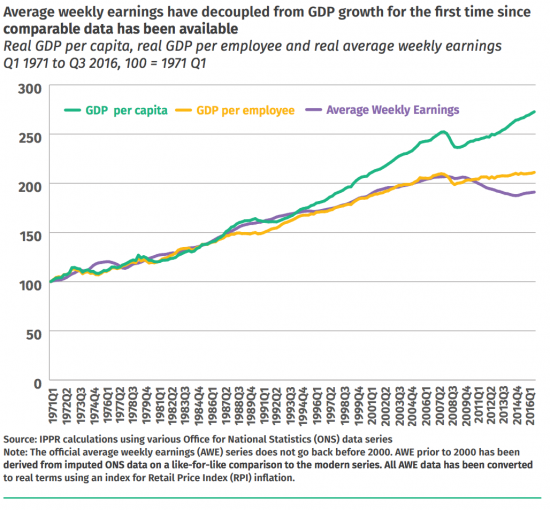 As IPPR say of this:

Economic growth has become ‘uncoupled’ from average earnings growth. We have an economy today that is growing in size but not translating this into higher earnings for a majority of the working population.

[The following figure] shows a very striking pattern: a rising share of national income going to labour from the second world war to the mid-1970s, and then a falling one until the financial crisis. This is a trend observed in most developed countries: it suggests a major shift in how modern economies both generate growth and distribute its rewards. 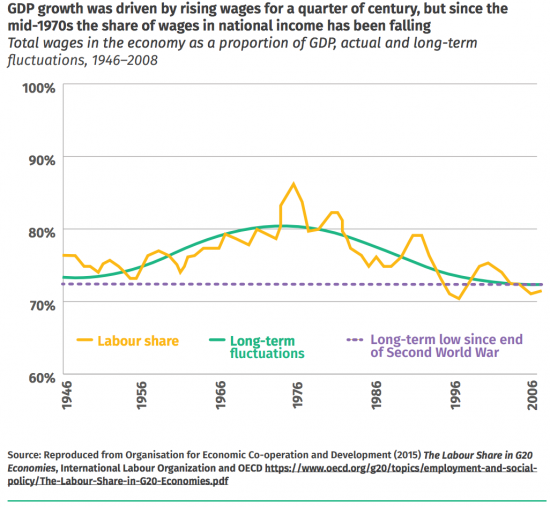 Whatever growth out economy is now seeing is not of the type we have seen in the past. Returns to profit and rents are rising. Rewards for effort expended are falling. A number of consequences follow.

One, of course, is increasing inequality.

Another is the increasing despair faced by many, more especially in the younger parts of society, about ever having any financial security.

But most particularly it is now very obvious that GDP is simply not a measure of well being for most people. Whatever merit it once had for that purpose (and it was always open to question) it is now very obvious that a simple increase in GDP, which has for so long been the goal of Treasury politicians, is of no comfort to most people any more. Indeed, as the gap between divisions in society increases it is actually possible that increasing growth increases the perception of division, and so the social and consequent stresses in society, all of which more than  counteract any apparent material gains achieved.

What then to do about this?

First, abandon GDP as a measure. As Charles Adams of Durham University suggested on this blog yesterday a much more useful goal for measuring economic well-being would be median wage income. It must be median and not mean wage because the mean is skewed by high pay and inequality; the median is not. And it must be wages because most do not own significant capital in this country and to exclude capital returns is, then, vital.

Second, inequality must be tackled, by progressive income taxes, wealth taxes, the benefits system, an enforced minimum wage (which we do not have at present for all practical purposes), better skills training and from investment in sustainable work (call it a Green New Deal if you like) anywhere but the south-east.

Third, the focus on the abstract - that is both money and the statistics derived from its flows - has to be replaced by a concern for the human story behind it.

That is what economic justice is about. These two charts show why it is needed.