Are shares over-valued? Even fund managers think so

John Auther asks the simple question of whether shares are too expensive at present in the FT this morning. He provides a lot of evidence. The answer is always that they are. In fact he argues that the only times they have ever been as overvalued are 1929 and 1999. It is a sentiment with which I entirely agree. But perhaps the most compelling evidence is that fund managers themselves think that. This chart is based on a survey of their opinion by the Bank of America and Merrill Lynch. A majority of fund managers think shares are overpriced. 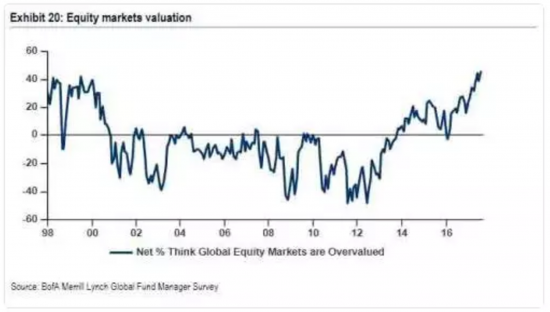 The summary of the argument (which is, admittedly made for US stocks but which, I think, applies just as readily to the UK) is:

But the critical point is that to buy now, you have to hope that dividends will start growing at a much faster rate (there is no reason to expect this); or alternatively that multiples and profit margins will continue at their current extended levels. Both — particularly margins — tend to be mean-reverting over time. So buying US stocks now requires a belief that “it’s different this time” with respect to the valuations that people will put on stocks, and the margins that companies can command.

Such beliefs are irrational. That is why I think a downturn is inevitable. And why I think anything that lures more people into the market than is wise is dangerous for the liquidity crisis to come when people will try to exit markets rapidly.