Cameron and Osborne: due to be found guilty by a jury of their peers

Michael Rosen asked a series of questions yesterday in response to the blog I had written explaining why in my opinion the country could afford to pay public sector workers the pay rise they clearly deserve. The questions are big enough and important enough to be worth addressing in some detail. They were:

Thanks for writing this and your other articles, Richard.

Following the big bail-out of the bank, the graphs showed a huge leap in the ‘deficit’. We were given to understand this as the amount the government had borrowed in order to pay for the bail out. This was then used almost universally by the media and the Tories and LibDems to ‘prove’ that Labour had ‘crashed the economy’ and now it was ‘all hands to the pumps’ to correct the ‘deficit’. I can hardly recollect a single voice outside of Paul Krugman to challenge a) what this deficit really was and b) whether it was ok to live with it, and indeed to carry on investing in useful projects in order to increase wealth and value.

However, according to your analysis, even this is skewed. Is that right? Are you saying, in effect, that there was no need to represent this as a ‘deficit’ anyway? It could have been represented as an ‘adjustment’ or some such? Or was money of some sort ‘borrowed’ from non-government funds in order to bail out the banks? If so, why? Why couldn’t the govt have just ‘borrowed’ from the Bank of England and let it disappear over time? Were the bond-holders (whoever they are) really knocking on Osborne’s door warning the Coalition that unless they cut wages/services/benefits they would up the cost of govt borrowing?

First, some data. This comes from a paper I wrote 18 or so months ago with my City colleague, Professor Ronen Palan: 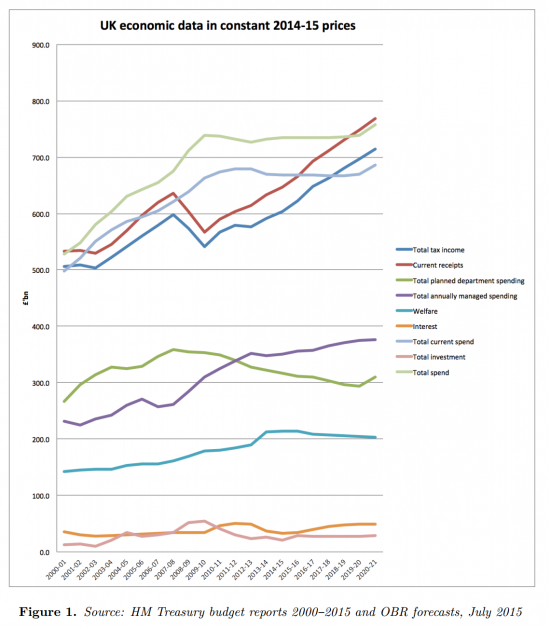 This data very clearly suggests a number of things. The first is that at the turn of the century, during the dot com boom, Labour raised enough tax to cover all spending.

Then, secondly, Labour chose not to cover costs with revenues because there was a pretty massive stock market crash from 2000 to 2003 and Labour were rightly determined that this should not lead to an unnecessary impact for the vast majority of people who had not partaken in the stock market's absurd bubble.

Third, Labour instead had revenue track spending with about a year's delay. This is, of course, what is normally inevitable. If, as I argue, government spending always comes first out of newly created money then it follows that tax receipts that recover that spend from the economy will lag behind them. And that's precisely what happened until 2007, in what looks in retrospect to be a remarkably controlled fashion.

Fourth, when the crash came it was not because spending went out of control: it very clearly did not. It rose to meet the urgent need of falling incomes, declining employment and the need for investment as a counter-measure, which Labour saw the need for and delivered to beat the crisis. Instead what caused the deficit was the collapse in tax  revenues, as the data makes clear. And, as a matter of fact, tax revenues are mainly paid by the private sector. In this case all the revenue that went missing were from that sector. So the crash was not created by the government at all: it was wholly private sector created, with the banks being the prime cause within that part of the economy. To pretend otherwise would be absurd, and just untrue.

Fifth, and largely for the record, this was not Labour's fault. Of course they did not regulate banks well enough. And of course they should not have believed in neoliberalism. That was their fault, but the Tories would have been worse on both counts. This cannot have been Labour's fault because Labour did not cause the crash of US banks or banks across Europe, where many did fail. The fault was systemic and inherent  in the madness of a banking system almost universally out of control (Australia and Canada were exceptions, for example, but the exceptions do in this case indicate the generality otherwise) .

Let me then address the specific questions. I, Ann Pettifor, Paul Krugman and of course some others, were arguing before the crash (in the case of Ann and myself) that what was happening was systemic. To lay the blame at Labour's door when the entire political culture of the UK, which made itself subservient to the supposed wisdom of markets in the way I describe in my book The Courageous State, is just a lie. The UK crash would have been as bad if the Tories had been in office as it was under Labour.

What was different was the reaction. Labour went for growth: it increased investment; it boosted the consumer economy (remember the 'cash for clunkers' scheme, which worked in moderation even if it was not very green, or economically inspired?); and it permitted the continuation of government spending. Why? Because the economy needed jobs. But most of all what it needed was money.

By 2009 banks had simply stopped lending. And people and businesses were saving because they were worried. Both were entirely logical things to do. But in an economy dominated by a single currency as the UK is savings must equal borrowings. And as the creator of cash, if most of the economy insisted on saving in 2009 (as it has also done so since because there is still only limited confidence in where we're going and what the risks are) then the government has no choice but to act as borrower of last resort i.e. it has to borrow what everyone else insists on saving because that cash has nowhere else to go. And so it ran a deficit. It did not even have a choice but do so: the economy demanded it because of the simple equation that in cash terms savings will equal borrowings and there was literally nowhere else for the money to go but to the government, who had to borrow it.

But in the process what the government did with that money (which was otherwise effectively withdrawn from active use in the economy, because that's what saving does) was what no one else would do, which was to spend it. And by spending it they did keep cash in the economy to ensure there was enough to make it go round, as is necessary if any economic well-being is to survive in such a situation.

And when even that spending did not look as though it could compensate for a lack of bank injected cash in the economy then QE had to be used as well.

But did the government have to borrow from bond holders? Could it have instead just borrowed the money from the Bank of England? Technically the answer is the government never needs to borrow from the public or gilt markets. EU law does though prevent a government borrowing from its central bank. That is to artificially support the role of banks in the bond markets, but the reality is that without that law we would not technically need those markets at all in the modern economy (we did in past eras, but what existed 50 plus years ago should be consigned to history now). That same law seemed to technically make us beholden to those bond markets. But the reality was different for three reasons.

First, actually people were begging to government to take their money. They still are, even though as I have shown in the last week, they literally make nothing from saving in government bonds; the corollary of which is that such borrowing costs the government nothing right now. The government did then have all the power in this relationship: they were the party doing the favour to bond holders by giving them a secure place to save, and not the other way round.

Second, as we now know (but did not for sure in 2009), QE works and quite simply cancels debt. Near enough one quarter of UK government debt has been cancelled by QE because the government cannot owe debt to itself, but now owns £435 billion of its own supposed debt.

And third, the bond holders did as a result have no way they could dictate terms to anyone. The pretence that they could demand austerity was a convenient and deliberately constructed myth that supposedly gave power to bankers and their friends in a way that was terribly convenient to a government intent on crashing the size of the state, but it had not an iota of truth in it. Actually bankers are desperate for government debt without which they cannot properly function.

To answer Michael's question then, the idea that we are beholden to bond holders is pure nonsense. I should say I have no problem with nonsense stories in the right circumstances, like when going on a bear hunt. But when used as a mechanism to suppress the well-being of people to the point where the lives of millions are deliberately turned into misery I think the situation very different, and culpability has to be taken in to consideration. If I could I would place Cameron and Osborne in the dock and I now suspect they might be found guilty by a jury of their peers. But, despite that, some are still crazy after all these years and so the pernicious myth goes on.