I am presenting at the Tax Justice Network conference this morning. I will be discussing the paper I have written with Professor Andrew Baker of Sheffield Political Economy Research Institute on tax spillover effects. These are generally thought to be the impact that one tax ssystem has on another, although we have extended the idea within an economy to the imoact one tax has on another. The new element to today's paper is our suggestion that The potential to map these spillovers exist. Thinking on this has only been undertaken on domestic spillovers as yet and only with regard to four, likely to be connected, taxes:

The mapping reflects the fact that assessments are made on a scale of 1 to 5. Five means a tax is vulnerable to attack: the tax to which it is vulnerable will have a low score because it artificially attracts a tax base. A line can be drawn between the two. A score of three is neutral.

Now put a tax in each corner of a chart using the logic that income tax should be top right because it is the tax that is often of greatest concern. Social security charges and similar style charges are also usually of some significance so they are placed top left. Then, because its revenues tend to be next biggest, corporation tax is placed bottom and right. That leaves capital gains tax in the bottom left.

Each tax can have a spillover on each other: here six different colours are used to identify the six relationships that can exist. A neutral score is a three between all taxes. So a perfect score looks like this: 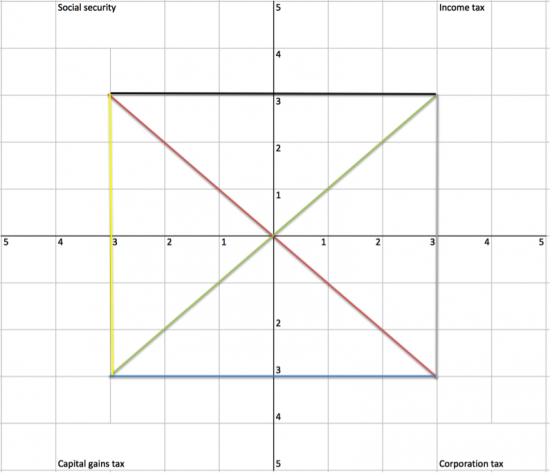 Alternatively, what is the worst case? That would be a score of five for both income tax and social security with each being vulnerable to abuse from corporation tax and capital gains tax, with both of them scoring one. Social security would score five for social security in its relationship to income tax which would get a one with regard to it. It is assumed that corporation tax and capital gains tax are neutral with regard to each to each other. This results in this chart of a tax system with high spillover impacts: 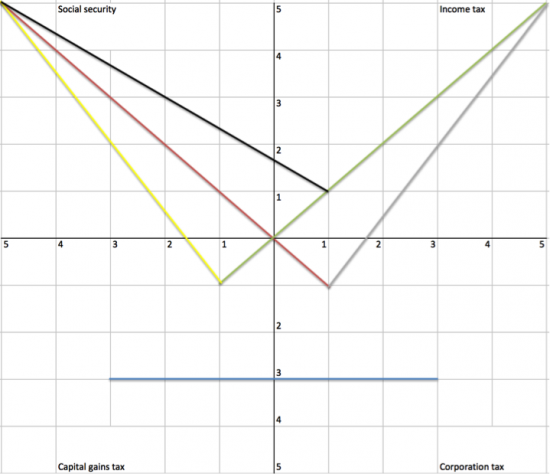 International spillover risks would require a different type of chart: work on this has not been undertaken as yet. The direction of travel is, however, I hope apparent. Comments are welcome.