The IFS has published its analysis of the election manifestos. The distributional impact is, perhaps, the most telling part of what they had to say. This is the summary: 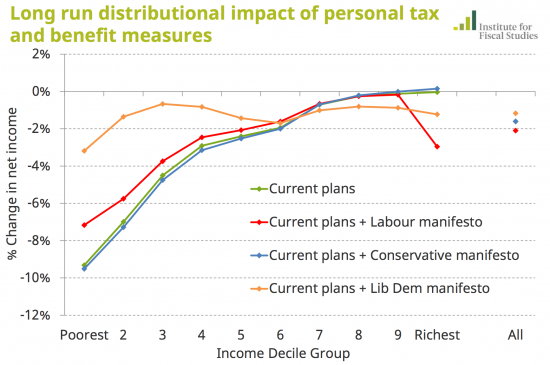 Credit where it is due: the LibDems come out best across the whole range of incomes.

Labour is clearly biasing the middle classes: plans on student debt help that.

But look at the top end. Under existing plans the Tories currently plan that the best off should be better off at cost to everyone else, and most especially those on lowest incomes. And that remains the case in their manifesto.

Labour markedly and appropriately challenge this. In practice the IFS doubt they can deliver but I in turn doubt some of the IFS assumptions: if they think there is a Laffer curve effect in the tax rate range that Labour is proposing then they're wrong.

Most importantly, however,  there is just one party dedicated to increasing inequality in the UK at this election, and that, of course, is the Tories.