The case for a 30% corporation tax

The OECD recently published a new report on what they call the labour 'tax wedge' in its member states. This 'wedge' is the estimated tax cost of employing a person in each member state expressed as a percentage part of the total direct cost of doing so.

There are actually eight such calculations offered to allow for different personal circumstances and incomes, but the OECD summarises the results as follows and I will use this summary: 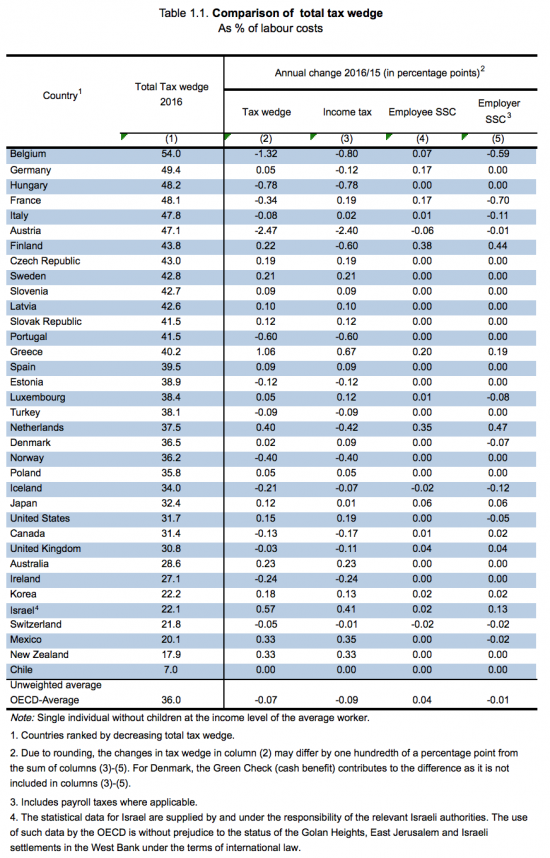 First, note that the UK is low on the list at 30.8% and that we are following the current international trend of a very slight reduction in rates.

Second, note that much higher wedges are associated with higher productivity and GDP per head in many (but not all) cases.

Third, let me add another dimension to this issue. This week I am heading for Scotland, in part to discuss issues its tax system faces as a result of voluntary incorporation by the self-employed and disguised-employed seeking to reduce their tax rates. When the difference in effective marginal tax rates, based in the above table,  might notionally be in excess of 10%,  and even after the new dividend tax are likely to exceed 5% (although differing assumptions have an impact here, and I know it, so please don't spend excessive time nitpicking the point), then the incentive to incorporate is significant.

Ygis incentive to incorporate is also profoundly costly in a number of ways. First, it keeps down wages. The benefit of the tax arbitrage is at least partly captured  by employers to reduce wage rates for all employees.

Second, it reduces the incentive to increase productivity: cutting tax through an option the government provides yields better rates of superficial return than investing in equipment or training.

Third, it really does reduce the incentive to invest. Again, assumptions vary across the tax system, because rules on investment reliefs  on capital expenditure (technically called capital allowances) vary depending on the size of the spend on capital equipment that a company incurs. The net result us, however, that small companies can often secure a 100% deduction for their spend in the year it is incurred. The corollary is that larger companies, who (pretty much by definition) do most investment (and who also go in for a lot of disguised employment) do not get that relief. They get relief of 18% on the cost they incur in the year they spend (again, I know there are exceptions). But, I stress, that 18% on the cost and us then subject to relief  at the prevailing tax rate of 20%. This means that companies in this situation get a saving of 3.6% in tax terms on the kit they buy in a year. To put it another way, tax relief reduces the cost of their £100 outlay in year one to £96.40, which  you can fairly call almost utterly irrelevant.

Now I know there are reliefs (reducing ones) in year two onwards  but let's be clear: the point has been reached where if a large company wants to save tax then spending money on capital equipment is just about the worst way to do it. Saving money by forcing people into disguised employment and taking part of the benefit provides a considerably better tax rate of return in most cases. Of course it reduces people's security and well-being and it harms investment and leaves the UK's productivity ratings trailing but this is the world of tax  incentives we live in, and the economy we have got is the not unsurprising result.

So what to do about it? First, of course, disguised employment that abuses the so-called self-employed person has to end. I have already suggested that changing the tax return to identify those supposedly self-employed with only one client would help identify address this issue. There were howls of protest, no doubt from those heavily invested in the system.

Second, the corporation tax rate should be increased. There is no sense at all in it being lower than the overall employment tax rate. A corporation tax rate of 30% is entirely logical and desirable in a world of growing inequality. If proper country-by-country reporting was undertaken backed by rigorous transfer pricing checks and decent controlled foreign company rules this is entirely sustainable now.

And third, all companies shoukd get 100% capital allowances in their spending as a corollary of the increased  tax rate. This means if they spent £100 on capital equipment they woukd get a tax deduction of £30 in the year they did so. That is a real incentive to invest where at present there is almost  none.

Changing the tax system by increasing corporation tax rates and capital allowance rates could help provide more secure employment, increase yield, reduce inequality and increase productivity all at the same time. The only obstacle is the obsession with low tax rates that suits the banks and tax cheats but harm the economy as a whole.

As in many issues political leadership is required. A country committed to productivity increases woukd start by removing incentives to cheat taxes. Who is going to say it though?