Why bother with the tax gap? An introduction to Modern Taxation Theory

This is my latest working paper published by City Political Economy Research Centre based at City, University of London: 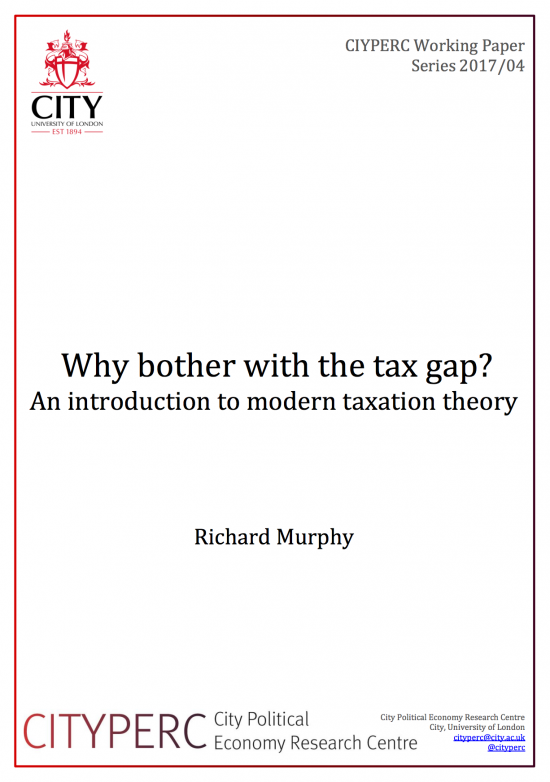 This is a working paper right now: it needs development but it was quite well received at a conference last week. In it I argue:

The tax gap has been defined as the difference between the amount of tax that should be imposed by the tax code of a country and the amount that is actually reported and paid on timely filed returns (Mazur and Plumley, 2007). The result is that it is very largely seen as a technical issue in most economics literature. So, for example, Gemmell and Hasseldine (2012), in one of the leading papers on the subject, primarily concern themselves with methodologies for estimating that gap. A response that considers behavioural as well as technical issues is typified in Slemrod (2007), where emphasis is placed on who evades their obligations to pay tax with what resulting cost to society in terms of revenue foregone. The focus in that paper and many papers is, however, on how to achieve tax enforcement. Politicians share that view, although with a tendency to focus on tax avoidance and not tax evasion1 . Rarely is the reason for tackling the tax gap stated explicitly. For example the UK’s HM Revenue & Customs, who measure tax gaps more often than any other tax authority in the world state that their reason for doing so is that it provides a useful tool for understanding the relative size and nature of non-compliance (HMRC 2016, 3). What is rarely discussed is the significance of that issue: the relationship between the tax gap and austerity as a feature of political economic policy is, for example, an issue that almost solely arises in popular political commentary (Murphy, 2015a).

This paper suggests that the tax gap and its causes needs to become a mainstream feature of the political economic narrative and does so on three bases. First, it is argued that important as the technical issues surrounding the tax gap are to view the issue in that context alone, or even to do so in connection with the associated behavioural responses, may be to misunderstand the nature of this issue. This, it is argued, is because whilst tax is widely seen in most economics literature as a technical exercise in revenue raising that is required to fund government spending, with government borrowing a measure of the inability of government to balance its books, this represents an inappropriate view of its current economic function. To extrapolate new understanding on money established in the economic mainstream by the Bank of England in 2014 (McLeay et al, 2014) it is now necessary to understand that the capacity to tax is not the primary constraint on a government’s spending. Tax is instead a residual economic necessity arising from the spending decision that it makes. To put it more straightforwardly, the long held belief that governments ‘tax and spend’ is wrong. What they actually do is spend and then must tax. Part two of the paper explores this theme.

Building on this theme the paper moves on in part three to explore the consequences of this thinking. Departing in the process from the thinking of Modern Monetary Theorists (Wray, 2015), whose focus on the relationship between tax as the mechanism that creates the value in sovereign money has led them to pay relatively little attention to tax design as an issue of economic or social concern, the paper argues that the primary purpose of tax is twofold. Whilst it is undoubtedly needed to constrain inflation within a system of fiat, state backed, currency creation its second, and at least as important role, is to effect social change.

Part four of the paper then considers the issues that might arise as a result of adoption of this approach when considering the tax gap and suggests that is in this context it is a measure of the failure to deliver that desired social change. Some suggestions for further developments are then offered.