More on why GERS might properly be called crap data

I was not quite as aware as perhaps I should have been about how passionate some Scots are on national income accounting, whether for their national GDP or government, when writing about the issue yesterday. I made what I thought a glaringly obvious observation that Scottish GDP is not determinable with any accuracy because much of the data required to calculate it, such as taxes, imports, exports, investment, savings and more besides, is simply not reliably available for Scotland and is instead based on estimates provided from what I called London, which was a euphemism for the whole Westminster controlled machinery of government. Then I was subject to a quite extraordinary day on Twitter, where I simply had no chance to follow all that was being said, as well as more than double normal traffic here.

Let’s be clear; some thought what I said made complete sense. Most appear to be on the Yes side of the debate.

The No side appear absolutely certain I am wrong, much of the focus of attention being placed on what’s called GERS (which stands for Government Expenditure and Revenue Scotland, although it also has a striking similarity to the chant of the supporters of one Scottish football club which I hope is just coincidence). I already noted on this blog yesterday that the GERS home page says:

The aim of GERS is to enhance public understanding of fiscal issues in Scotland. The primary objective is to estimate a set of public sector accounts for Scotland through detailed analysis of official UK and Scottish Government finance statistics. GERS estimates the contribution of revenue raised in Scotland toward the goods and services provided for the benefit of the people of Scotland. Despite the emphasis on the word estimate I was assured that this document is a) reliable and b) quite emphatically based on the work of Scottish civil servants whose good work I was insulting. I was frequently asked if I had read the methodology for its production before writing (to which the answer was yes, because this is an issue I ha visited before in discussion on the Scottish economy).

Note the emphasis on the word 'estimate': that is key.

Let me then deal with these issues before, if I feel so inclined still, moving on the question of Scottish GDP. I will focus on government revenues for reason of length and because this is the more uncertain estimate. To assist this is the GERS note on where the data comes from (the digital version is here): 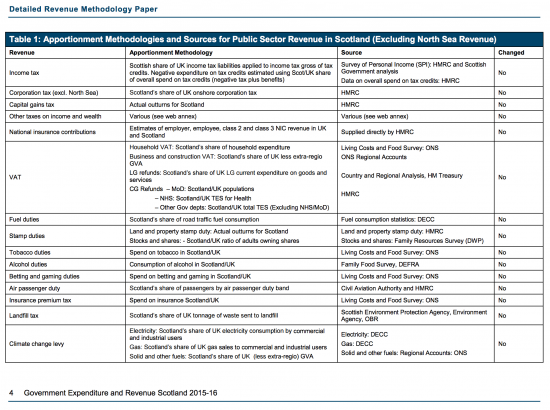 Note that there are 26 variables. As far as I can tell two (local authority income and, maybe, the estimate of Scottish oil revenues) are definitely calculated in Scotland, and the latter is an estimate, not a fact, which is pretty significant in this case. Another three or fur minor ones (car tax, aggregates levy, airport taxes) are likely to be locally accurate. The remainder which is the vast majority) are figures supplied, as I suggested, by Westminster linked organisations, or ‘London’ as I called it. I think I can happily rest my case with regard to that claim. If anyone suggests this data was made in Scotland they are deluding themselves. Whatever else might appropriately be described as such, this data is not.

As to NIC, nothing requires an employer in Scotland or England to say where their employees are located. The fact the NIC is paid from a particular address is neither here nor there: it may give a hint. It is just as likely not to do so.

The same is true for VAT. Scottish VAT is declared on whole of UK VAT returns: no one knows how much is due for Scotland. It’s guesswork based in a consumer survey. Now just imagine for a moment that company accounts were based on extrapolated consumer surveys to work out how much people might have spent with the company instead of using the accounting records and consider which is better, and you get my point. A distinctly poor option is being used.

Last, there isn’t a person on wealth who knows how much profit is declared in Scotland. I suspect that not a single company that straddles the border knows. And why should they? Right now the data is meaningless. In that case no one has a clue what Scottish corporation tax owing should be.

So the resulting figures are estimates that I would suggest are subject to an enormous degree of uncertainty. As I tell my students when I teach them about data quality (and I do on my course at City, University of London) some data is crap. That is a technical term. It stands for Completely Rubbish AProximations. This data meets that criteria.

And it could be manipulated. Heaven forbid that such a thing has ever happened.

That’s what I claimed. And I think I was right to say so. This is some very approximate data that Scotland does not control being used for a purpose for which it is not fit, which is to say whether or not Scotland would run a surplus or deficit post independence when just about everything, including the data, would be different.

I have to say those protesting do so without justification. This information cannot sustain the claims they make if it whilst mine are wholly justified.