Universities are not about making money: they are about being the conscience of society

The House of Lords defeated the government on its Higher Education and Research Bill yesterday. I suppose I should declare an interest: as I am now an academic I have some interest in this issue, but candidly I would have done anyway because the Lords are right to think that this Bill really matters. It literally strikes at the very heart of what we value in society.

What their Lordships rightly noted was that the Bill did not define what a University was, or what it was meant to do. This was not by chance, I am sure: the Bill as presented makes universities into money making bodies and its sole aim appears to be to promote that purpose above all others. So their Lordships struck back, inserting a new Clause right at the start of the Bill stating what they thought the purpose and function of a university might be. It was as follows: 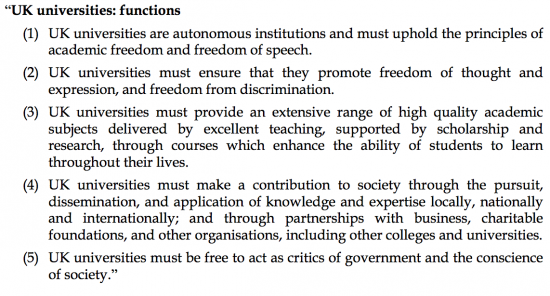 I think that well put. I agree with it. It needed to be said. It fundamentally changes what this whole Bill is about. And so it should. And yet 221 Lords voted against it. Thankfully 248 voted for. It is absurd that the values of society have to be upheld by those not elected to do so. But so be it: I am pleased that they did.