I spent some of the weekend in the company of doctors. The subject of some conversation was pretty predictable.

One doctor present said his hospital had been on red bed alert every day last year: they had never been out of acute shortage. That same doctor said this was going to get worse: closure of wards to which the hospital was committed was going to cost up to 400 bed spaces in his hospital by 2019. The replacement wards, which will have fewer beds, have not begun as yet. As he put it, rocket science was not required to work out that an even greater crisis was looming.

And we do not have many hospital beds in the UK. The last data seems to have come from 2011. I have used summaries from FullFact: 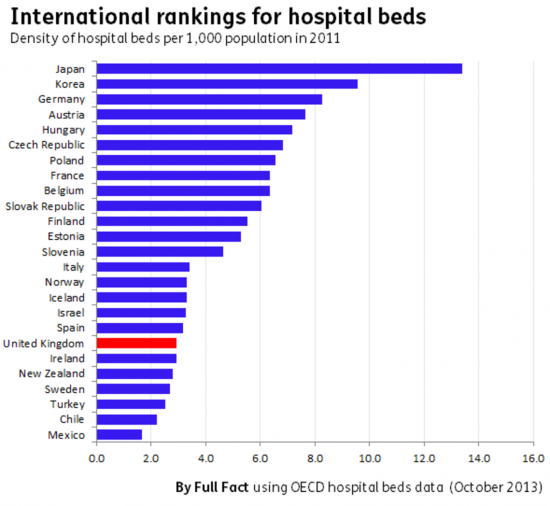 Only Sweden and Ireland are below us in the EU. And our trend is also serious: 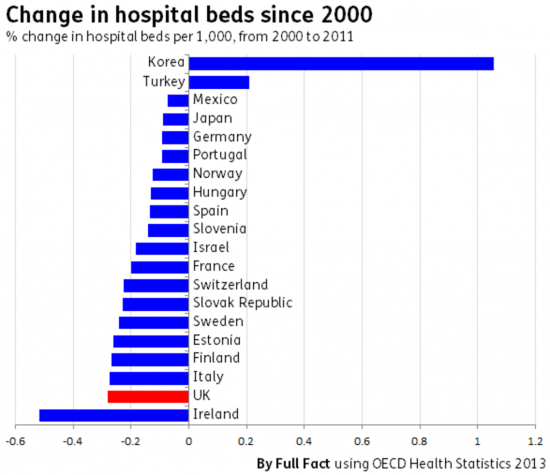 The government says the NHS does not need more money. It says the NHS must instead become more efficient. and it is talking care in the community. But if that's the direction of travel it is moving into uncharted medical territory. Or we might instead say its taking unprecedented risk with people's lives because, like it or not, some conditions and illnesses do need to be monitored in hospitals. No one wants to be there longer than they have to be. But to pretend that we can seriously cut the hospital bed rate in the UK looks like management consultant and not medical consultant speak. And that's pretty worrying. Not least, it seems, to doctors.