Brexit or not we’re going to have migration. It’s time the government said so

Theresa May appeared to suggest yesterday that leaving the EU single market was a price worth paying for migration control. I am not at this moment arguing whether she is right or wrong. My point is quite different. It is that if this is the case then she has to be vastly more explicit about what she thinks migration control means.

To illustrate my point I use some data drawn to my attention by environmentalist and Green New Deal member Colin Hines, of whom there will be more to say this week. He had looked at doctor registration in the UK as part of his research for his new book. This is the base data from the General Medical Council: 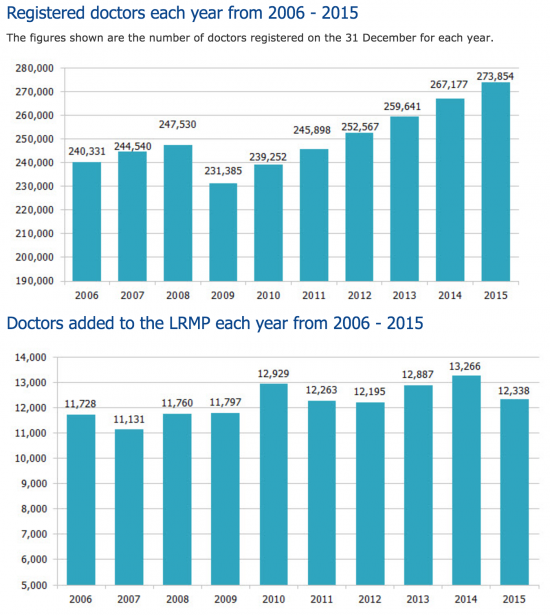 But then you realise that there are at most 7,600 doctors in training as a result of UK medical school graduation each year (page 30, here). And what that means is that the growth in doctor numbers in the UK is almost entirely due to immigration.

Now that could be ended. It would be of benefit to some countries if that was to happen. More than 10% of all Romanian doctors work in the UK. But that's not the point I am making. Unless Theresa May says this migration is to continue then the NHS will be in crisis because we do not and apparently will not train all the doctors we need, preferring instead to have 37% of all doctors in the UK come from abroad to work here.

In that case what does migration control mean?

And why do we need to control EU migration so specifically when we can already control half of all migration because it is not from the EU?

And what will the gains from this extra control be?

I ask the question genuinely. I want to know. I think other people will want to know. And I think if Brexit is to be managed successfully then there needs to be clarity on this issue because it has the most massive potential to backfire. If Brexit means migration control but in practice most migration will continue after Brexit we have a right to know why that will be the case, when it will be admitted, how that migration will be controlled, what that control will cost, who will supervise it and how, and why that price is worth paying. And right now we don't. But someone is going to have to talk about all these things soon. Or the NHS crisis is going to get a lot worse.