Mark Carney has still not appreciated the scale of the problems we face, or addressed the solutions we need

Mark Carney gave a speech yesterday in which he used this graph: 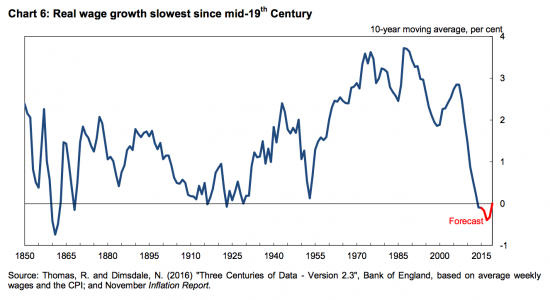 Now, admittedly, growth has been sluggish: 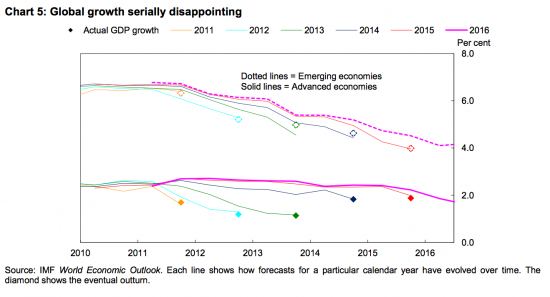 But there has been growth, and it has been unequally shared. This is Carney, again:

In recent decades, as global inequality has fallen markedly, it has edged ever higher in most advanced economies. In Anglo-Saxon countries, the income share of the top 1% has risen notably since 1980. Today, in the US, the richest 1% of households receive 20% of all income.  Such high income inequalities are dwarfed by staggering wealth inequalities. The proportion of the wealth held by the richest 1% of Americans increased from 25% in 1990 to 40% in 2012. Globally, the share of wealth held by the richest 1% in the world rose from one-third in 2000 to one-half in 2010.

And as he said in response:

Globally, since 1960, real per capita GDP has risen more than two-and-a-half times, average incomes have begun to converge, and life expectancy has increased by nearly two decades.

Despite such immense progress, many citizens in advanced economies are facing heightened uncertainty, lamenting a loss of control and losing trust in the system. To them, measures of aggregate progress bear little relation to their own experience. Rather than a new golden era, globalisation is associated with low wages, insecure employment, stateless corporations and striking inequalities.

These anxieties have been compounded by the twin crises of solvency and integrity at the heart of finance. When the financial crisis hit, the world’s largest banks were shown to be operating in a “heads-I-win-tails-you-lose” bubble; widespread rigging of some core markets was exposed; and masters of the universe became minions. Few in positions of responsibility took theirs. Shareholders, taxpayers and citizens paid the heavy price.

As a consequence of all these developments, public support for open markets is under threat.

He is right. And I admire him for saying it: I am not sure previous Governors would have done. They would not have said this: 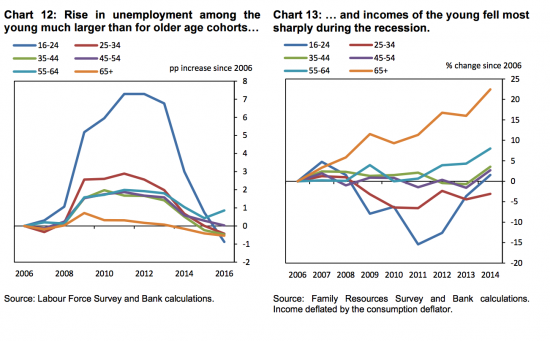 Experience shows that when the economy enters recession, the poorest are hit the hardest. During recessions the lower-skilled, lower paid people tend to lose their jobs first. In the extreme, prolonged recessions can lead to permanent labour market scarring, with potentially devastating effects on livelihoods, identities and communities.

And why he was right to conclude that:

For free trade to benefit all requires some redistribution.

I did not agree with all his comments on the limit of the state to achieve that: let's be clear that the views he offered were not always in line with my own, but he was again right to say:

Redistribution and fairness also means turning back the tide of stateless corporations. As the Prime Minister recently stressed, companies must be rooted and pay tax somewhere: businesses operating across borders “have responsibilities … in terms, for example, of payment of tax.” They must recognise “the role that they play in local communities and the responsibilities that they have in any country they are operating in to abide by the rules.”  That is why the G20’s BEPS initiative, which will allow all countries to work together to implement measures against tax Base Erosion and Profit Shifting, is so important. And that is why the G20 might at least consider, as Larry Summers has suggested, a minimum tax on reported earnings to be paid somewhere.

I have proposed such a tax.

But there is a pre-condition for it and that is country-by-country reporting. Until global corporations are held to account locally we cannot know where and how and why they owe tax, and yet governments will not commit to this. Nor did Carney.

And whilst Carney called for fiscal reform he still ended up emphasising monetary policy.

I welcome the recognition of the problem Carney offered.

I despair that the obvious solutions remain far away. He did not call for global corporations to be held to account. The calls for fiscal reform were not strong enough. The arguments against the role of the state remained too strong. Even in the face of the obvious implications of the data necessary conclusions, and the need for radical action, were not stated.

Our economy is clearly in a mess and Carney knows it. Offering excuses for maintaining the status quo with a twist or two will not save it or the market system to which Carney is wedded. Only radical action can do that. And we're still not getting to the point when that is realised. Will we before it's too late, I wonder? Right now that failure is what is fuelling the Hard Right. Carney had better get his head round that, just like most of the UK's political class. Because unless accountability, fair tax and real redistribution happen it's not just the market system that Carney seeks to protect that is at risk, it's democracy itself. And that awareness has still to permeate, I fear.