1.25 million UK companies won’t pay tax this year and HMRC does not know why

The Office for Budget Responsibility looked at the issue of incorporation in its report linked to the Autumn Statement. In there it noted that (page 121):

The incorporations model is estimated on a sub-population of companies that are considered to have a genuine choice over their legal employment status. This population is defined as those with positive trading profits (after losses being carried forward) of up to £500,000 (in 2014 prices). There were roughly 1 million such companies in 2014, out of a total registered company population of 3.2 million.

To put it another way, this is the proprtion of companies HMRC say admit they owe tax. I summarise the HMRC and OBR data as follows (click for larger versions), adding in data from Companies House on the total number of companies at the end of each year: 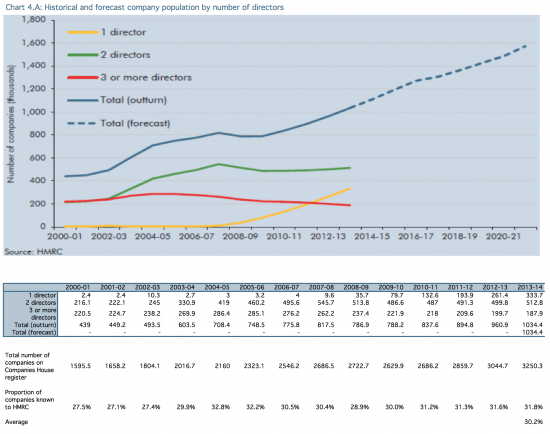 The essence of the issue is, as far as I am concerned in the last few lines. By comparing the HMRC data on companies paying tax with the total number of companies on the Companies House Register at the end of each year we get a ratio of declared tax paying companies to total companies. That ratio rises from 27.5% to 31.8% over the period: on average it is 30.2% over the period as a whole.

The obvious question, not asked by the Office for Budget Responsibility, is what do all those other companies do?

Based on my summary of Companies House data from 1998 to 2013 I can say that on average 9.6% are being dissolved, which does not of course mean they do not owe tax. That may, of course, be exactly why they are being dissolved. But what we know is that a  majority of these companies will be in the process of dissolution because the have not filed documents with Companies House: it is likely that they have also failed to tell HMRC what they are up to as well.

Some of course are also too new to make a corporation tax return. Based on the same data I think it very likely that at least 16% of all companies are in this position at any time.

Based on my work on HMRC and corporation tax returns I also know that HMRC does not ask for returns from about 28% of companies on the register each year. If 16% are because they have not existed long enough to be asked the other 12% must be because HMRC has agreed not to ask them for returns. We know HMRC do this: if a company says it is dormant HMRC agrees, without further evidence, to waive demands for tax returns for five years.

What in that case of the remaining 30% or more companies?  I have researched this as well. On average 19.6% of companies sent corporation tax returns between 2007 and 2012 did not submit them. However because not all companies were asked for returns that was on average 12.3% of the total population of companies who ignored their obligations to file.

And of those who did file returns 35% said they did not have taxable income, which again because not all were asked for returns amounts to an average of 17.6% of the whole register each year.

In summary then the register might at any time be made up as follows, with an illustration of the potential number of companies involved based on the current register to give this some context: 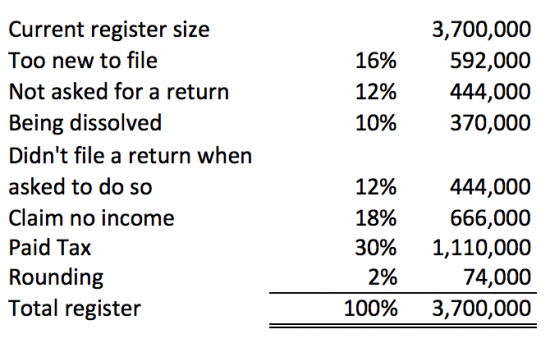 So now we have 34% of companies that do not pay tax because they were not asked for a return, did not actually submit one when asked, or are being dissolved, many of which will be because they have failed to return documents to Companies House. It is fair to conclude that HMRC probably know remarkably little about most of these companies.

It so happens that we also know about the number of companies HMRC investigate each year to form their view of the tax gap. As they say on this issue in 2016 (page 46):

This chapter provides detail on HMRC’s random enquiry programmes and the methodology used to produce the avoidance and hidden economy tax gaps. This chapter covers all the approaches taken to produce income tax (IT), National Insurance Contributions (NICs) and Capital Gain Tax (CGT) tax gaps as well as the Corporation Tax (CT) gap from small and medium sized enterprises.

And they follow on with this table of the number of enquiries made: 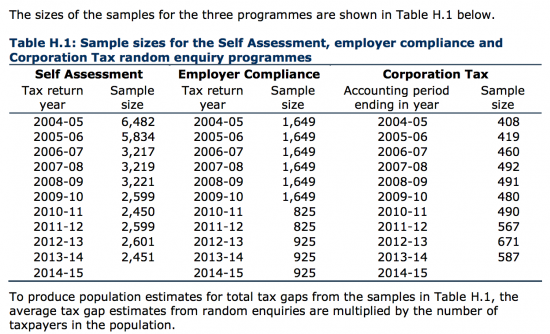 Note the overall declining trends in samples. Note too that when it comes to companies the sample size is very small: the average is 506. Now I stress I am well aware of the nature of statistical sampling as an auditor but let me add a spanner in the works here: I think this sample is based on the returns requested to find the error rate in them. That means the 12% of companies not asked to make a return are definitely not tested. In addition, whether any sampling actually takes place on the returns not received is open to doubt: the methodology does not make that clear and allows for the possibility that substitute returns are tested if a return is not received. As a result I think there is a very good chance that it can safely be said that HMRC do very little work at all on a significant number of the companies from whom they never get a return.

What does this suggest then? I think it means that at present at least 34% of companies (or at least 1,250,000 companies) are subject to little or no scrutiny by HMRC and that the number may be higher still. I admit there is some uncertainty in that number because categories must overlap on occasion, but the point remains, which is that just as Companies House is not undertaking effective regulation of UK companies, nor are HMRC. And that is a major cause of the UK tax gap.

The OBR may be right in that case to look at the cost of incorporation to HMRC. But they might be much better off asking whey they know so little about the tax liabilities of so many companies in this country because the yield from doing so may be very much higher.