The Office for Budget Responsibility assume Brexit changes everything

The sectoral balances show how the government's deficit fits into the lending and borrowing of businesses, households and the overseas sector. By definition these sums must add up to zero: every lender must have a borrower.

In the March OBR forecasts the balances looked like this: 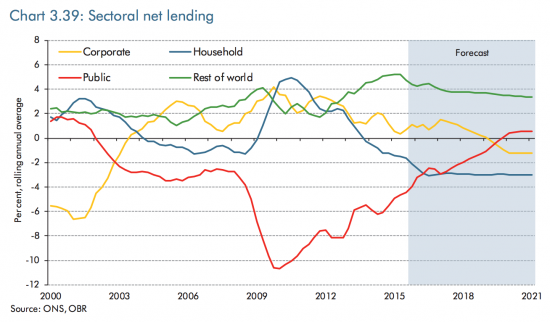 This has now changed to this: 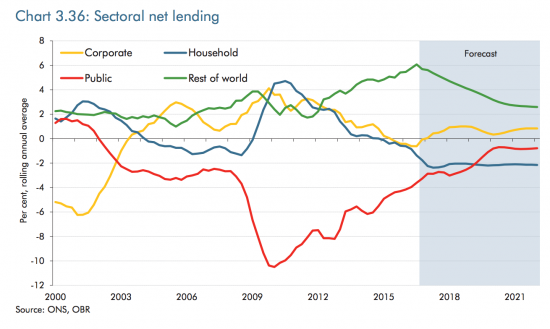 What are the big differences? First, as always seemed unlikely, the government is not going to get to a surplus.

Second, because of Brexit (presumably) the overseas sector is going to run down its funds in the UK, significantly.

Third, the public are going to borrow much less. That must mean we will not be spending as much.

Fourth, most tellingly, business is still going to be saving: the assumption in here is that Brexit is going to put an end to any chance that business is going to turns its cash into something more useful anytime soon. Investment is being put on hold. It seems that the OBR shares my view that they simply do not know how to use their money for constructive benefit.

The result in combination is that a much smaller stimulus to the economy is expected now as people and business will be saving more. I think both likely. The one I am not sure about is the rest of the world. Trends here are hard to predict. How government borrowing fares will depend very much on that. The OBR are assuming that Brexit changed everything. That is the only way you can explain the total inflexion point in the green line. Maybe it did. We will have to wait and see.