HMRC's new tax gap data, on which I wrote last night, is wrong. I can say that with considerable confidence, having torn it to shreds many times over the years.

You could start here. And then go to my most recent report on the issue, here. Or an older one, here.

Or you could just consider a few simple statistics of which the most obvious is that the total VAT gap excluding criminal attacks on the system is 9.7% (10.3% total less missing trader fraud losses of about 0.6%). Now some of that is debt and a tiny part avoidance, but all taxes suffer debt losses and most more avoidance so that is not unusual. What is unusual is that this is the one figure based on working from GDP downwards rather than tax returns submitted upwards. And it is, as a result higher in total than all of the other main tax gaps except, in rate terms, small business self assessment: 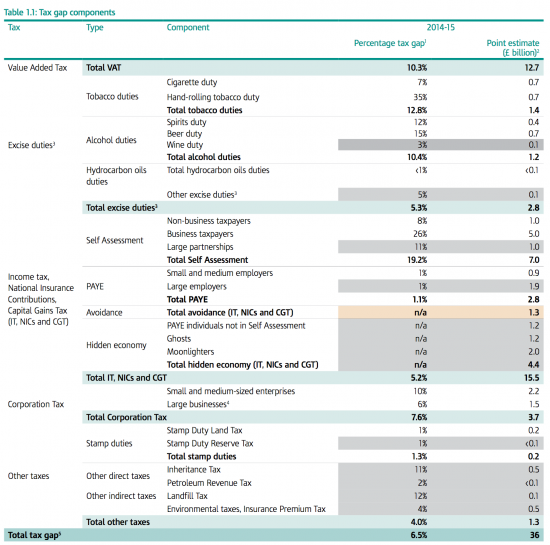 But this is itself odd. First, most (by some way) small businesses are not VAT registered, and legitimately so, in which case these two tax gaps do not significantly overlap, meaning no strong connections can be drawn. Second, in that case the majority of the impact of the VAT loss should be seen in other tax gaps, corporation tax being the obvious one, since there is strong tax incentive for a business to be incorporated by the time it reaches the VAT registration limit.

Now it's noticeable that the small company abuse rate is 10%, but notice the total loss is just £2.2 billion. This however is where the likely consequence of almost 10% of unrecorded turnover in UK businesses is going to be felt.

Let's be clear what that level of unrecorded turnover means. The UK private sector is now delivering a little less than 60% of UK GDP. But without finessing numbers in too much detail (and allowing for the fact that GDP is understated because the tax gap data is excluded from it) this is likely to mean that it represents about £1 trillion of economic activity. And approximately 10% of this is excluded from VAT declaration. Which means that it is also excluded from all other tax declaration as well: although HMRC persistently deny it once a sale is suppressed for VAT purposes it is suppressed for all other purposes as well. There is no way that the income can be re-inserted into a tax return to make it taxable if it is excluded from sales records.

Tax lost on £100 billion of turnover will be at a total rate of nearly 40%. That's because total tax rates need to be considered at this macro level and in most cases the loss will be at higher rates of income (or at least be over personal allowances) as the loss will be from the top slice of declared income. Call that loss £40 billion then, of which part is, of course, VAT. But that still leaves after bad debt and criminal activity more than £30 billion of tax loss in the rest of the economy and that is simply not reflected in this tax gap data.

And remember that this does not reflect tax avoidance, which is virtually non0-existent in VAT, or losses on other taxes, like CGT and inheritance tax (which I have argued are much higher than HMRC admit), whilst HMRC data also excludes whole rafts of avoidance data, such as that by Google. As I have also argued, it also massively understates debt where HMRC write-offs of balances they thought owing are not included in the bad debt figures.

To put it another way, simple logic says HMRC's data has to be wrong because they refuse to consider macroeconomic data as the basis for this macroeconomic estimate and instead persist with the idea that if a taxpayer does not submit a tax return this implies they have no taxable income. My research has shown that maybe 1 million companies that may have tax liabilities fail to submit tax returns each year but still HMRC ignore this issue. and it's this point blank refusal to engage with the real issues in our tax system that is the biggest worry about HMRC's current management. The result is that the tax gap data is about a reliable as a tax evader's tax return and that is a national disgrace.