HMRC has published this year's version of their Tax Gap report. The supposed Tax Gap that they report is £36 billion. 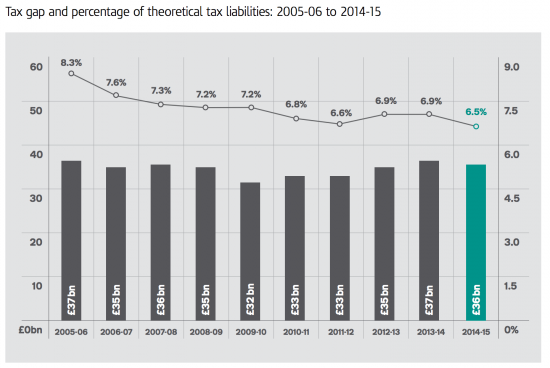 The figure has never been higher than £37 billion and never lower than £32 billion. What is the chance of that? Especially when as the report notes of the methodologies used:

Experimental is an interesting phrase: it in essence means 'we made it up'. If you don't believe me note this explanation:

Where assumptions means 'we guessed it'.

And note even that the supposed established methodologies may not actually be used. In one of the areas you would have thought that HMRC would know most about, which is large business tax avoidance, this is the data (from their Excel tables):

Let's ignore the obvious fact that the notes make clear that the second 2013-14 column is actually 2014-15 and instead note that for these key estimate they have done no work since 2012-13 and have rather optimistically assumed that the significant, and unexplained falls post 2011 continued, implying that in less than a decade tax avoidance in big business almost halved.

Someone should tell Theresa May. She said at Conservative Party conference:

Nobody, no individual tycoon and no single business, however rich, has succeeded on their own.

So it doesn’t matter to me who you are.

If you’re a tax-dodger, we’re coming after you.

If you’re an accountant, a financial adviser or a middleman who helps people to avoid what they owe to society, we’re coming after you too.

An economy that works for everyone is one where everyone plays by the same rules.

So whoever you are you — however rich or powerful — you have a duty to pay your tax.

But according to HMRC the problem is already almost solved.

Except, that is, for one obvious little problem: which is that they have not actually bothered to go and find out.

And that is typical of the their deeply misleading tax gap statistics which they trumpet as if it is an indication of their success when candidly they only looks like a crock of dubious data, at best.