Solving the Deutsche Bank crisis: a simple plan may be the only viable option

Markets are speculating that Deutsche Bank is insolvent. I cannot say but if it is then the risk is phenomenal. We have yet to get over the failure of Lehman: Deutsche, if it failed could very easily be worse.

So we're back to the same scenario as 2008. Does Deutsche fail and drag all the other major banks with it (as it very easily could because no one will have a clue how its derivative counter-party risk is really spread)? Or is it bailed out and banking survives, again, unaltered at cost to all the rest of us? Or is something else needed?

The only viable option is the third of these, of course. So how is the risk managed?

First, note the following list of the world's Top 50 banks (which because of the way US GAAP works will under value US banks): 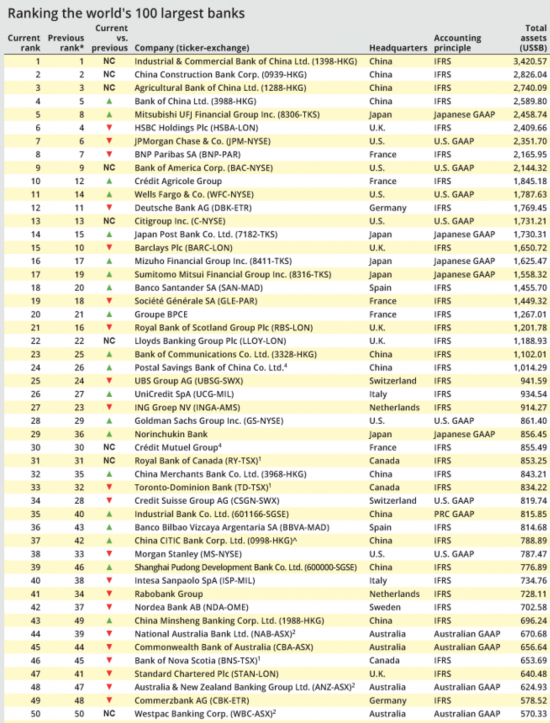 There are more assets here to save Deutsche than anywhere else. And if it is not saved the value of every one of these banks will fall, in total by more than Deutsche could lose. So the solution to any crisis is, and can only be in the banking system.

Third, there is then a need for international cooperation. There are, I think ways to achieve this.

One is for international agencies (the IMF and World Bank) to step in to provide the necessary credit to keep Deutsche afloat to manage its commitments in an organised fashion.

Next is for this to be done in association with the Bank for International Settlements, which could manage the technicalities of such an arrangement.

And last is the need for international cooperation to recover the cost of such short term action from other banks through levies, charges and taxes that ensure that the collective cost of saving the system of which they are all a part falls on them alone and not the rest of society. I think the OECD could have a role here, potentially.

The stages are successive: in other words the day has to be saved first, then managed, and then costs have to be recovered. I do not believe it beyond the wit of people to achieve this goal. I may be an optimist, but I think most things plausible with political will. And I think the solution workable, albeit it will then demand real change from banks. The over-leverage in which they all indulge will have to end: there is no way round that.

I can stand accused of being simplistic. In the face of a crisis simple plans are often the best: everyone then knows what is required of them. We may be facing something bigger than a crisis. In that case 'the simpler, the better' may be an appropriate comment.