I have already mentioned the press release issued by the Bank of England yesterday on its £10 billion corporate bond buying programme and the need that it highlights for public country-by-country reporting. There is another feature of this announcement that I think worthy of note. In the announcement they say: 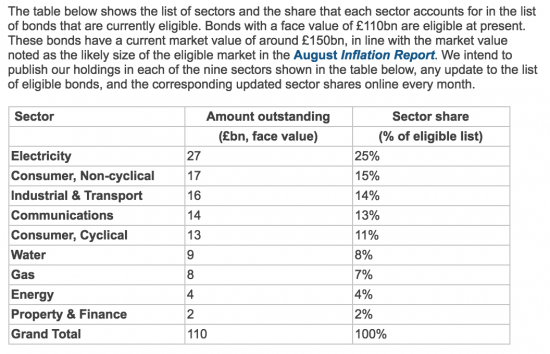 To put it another way, if the vast majority of the electricity, communications, water, gas and other energy companies in question were at one time publicly owned utilities (and that is likely to be true) then over half of the bonds available for purchase have been issued by former state owned activities. This shows three things.

First, what a bad deal we got in selling them.

Second, that a great deal of the value in the UK was state created.

And third, that we cannot now rely on these companies in private ownership to  deliver what the country needs without state aid.

In that case how much more sense it would make to start reacquiring stakes in these companies with the funds in question? That would also prevent the most common usage of any new bond issues that the BoE programme might stimulate, which is share repurchase.

The BoE policy is yet another exercise in dogma over-ruling economic sense. What we are seeing is market failure in action: the need for investment is being ignored by private investors because they cannot make a gain from it. There is a need for that investment but instead of funding it directly as People's Quantitative Easing would do the Bank is trying to tickle the market into action. That won't work: the incentives are not changed by small changes in interest rates. The need is for direct action. And for courageous politicians willing to take it. Instead we get this farce.