The government is still in denial on the tax gap

Labour tabled an amendment (reproduced at the bottom of this blog) to require preparation of a comprehensive report on the tax gap during debate on the Finance Bill in the House of Commons last night. For the record, I was not involved in drafting this, although it is very clearly based upon my work on this issue.

As Rebecca Long Bailey said for Labour during the debate on this amendment:

[N]ew clause 13 would require a comprehensive report into the UK tax gap, which is defined as the difference in any financial year between the amount of tax HMRC should be entitled to collect and the tax that it collects. Such difference derives from tax avoidance and evasion. The contents of the report would be as set out in the new clause, and it would have to be carried out in consultation with stakeholders. It would examine a number of areas relating to tax avoidance in the hope that the Government might review their policy and tailor it to deal adequately with such issues.

As Members who read new clause 13 will see, the part relating to HMRC goes into a lot of detail. Briefly, however, the report would be required to cover figures for the UK tax gap for the past five financial years; details of the model used by HMRC for estimating the UK tax gap; an assessment of HMRC’s efficacy in dealing with the UK tax gap; details of the tax revenue benefits for companies engaged in public procurement that are registered in the UK only for tax purposes; an assessment of the efficacy of the general anti-abuse rule in discouraging tax avoidance; consideration of the benefits for tax revenue of introducing a set of minimum standards in tax transparency for all British Crown dependencies and overseas territories; and, finally, an assessment of the impact on tax revenues of establishing a public register of all trusts located within the UK, British Crown dependencies and overseas territories.

The point made is, in effect, very simply. There is obvious and very real doubt that HMRC have got the tax gap right. When 40% of it is made up of 'illustrative estimates' (fiction, in other words) that has to be the case.

The government was in full denial mode. Jane Ellison replied for it, saying:

Turning to deal with the lengthy speech and case made for Labour’s new clause 13, which provides for a report on the UK tax gap, the tax gap is an official statistic published each October and it is produced in accordance with a code of practice for official statistics, which assures objectivity and integrity. The methodology is judged by independent third parties to be robust, and it has been intensively reviewed and given a clean bill of health by both the International Monetary Fund and the National Audit Office. There is therefore no need for a report on the tax gap. Furthermore, HMRC publishes a methodological annexe alongside the tax gap publication, which provides details of the data and methodology used to produce estimates of the gap.

I think it fair to say that, in speaking about new clause 13, the hon. Member for Salford and Eccles painted a picture which, on the Government of the House and, I suspect in other parts as well, could be regarded as at the very least ungenerous and in many ways inaccurate, unfair and, indeed, unrecognisable, given the way in which the she downplayed the efforts made by the Government. To call that tinkering at the edges is simply nonsense.

I regret to say that I think it was Jane Ellison offering the House nonsense. The NAO says the tax gap is right within the framework in which it is reported, and has still said improvements are needed. So did the IMF: it said a whole new top down methodology should be tried and yet the minister ignored that. And she simply ignored that for much of the HMRC report there simply is no data: bluntly, it's made up. Pointing that out is not being unfair: it's doing the country a service. 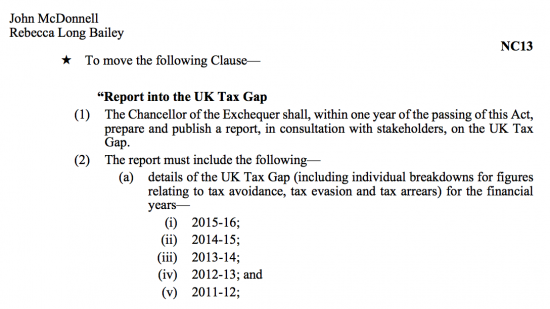 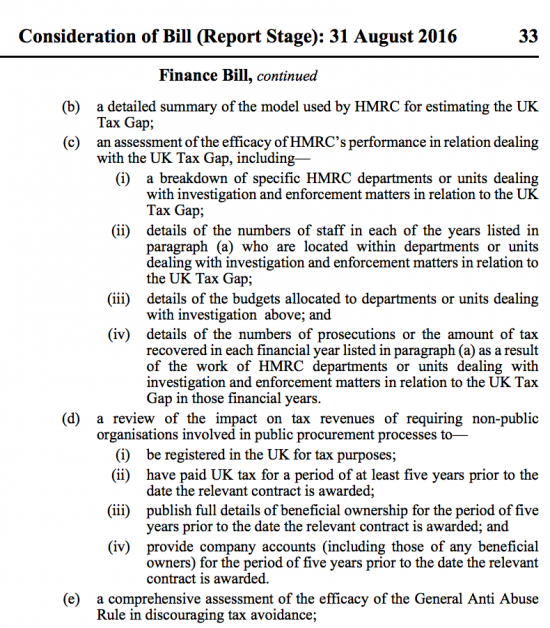 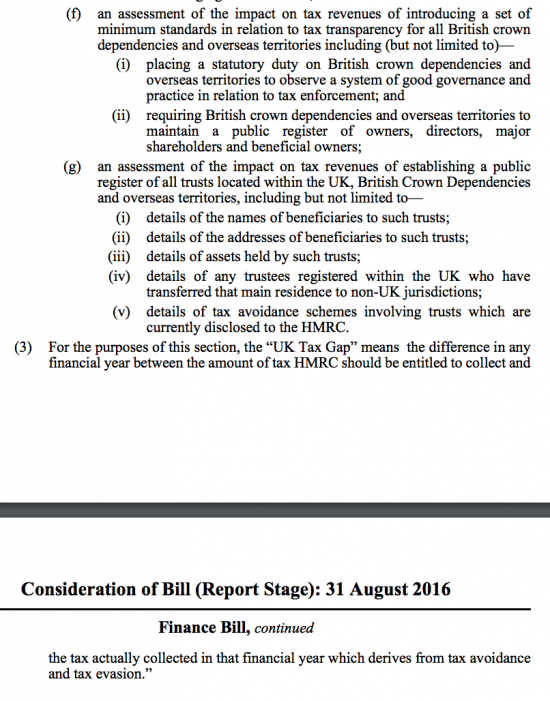