I wrote earlier this week about the fact that I had reason to reflect on the future of my blogging. Many thought this the precursor to some big announcement. I am sorry to disappoint. It was instead a hint that I had realised that I was about to celebrate the tenth anniversary of this blog. The first, rather short, post was on 8 June 2006.

There have been just over 99,100 comments, at a rate of 27 a day, every one of which I have had to read (and some of which, of course, I have written). Despite the claims from right wing commentators,  the vast majority of comments that were not spam have been posted over that time. 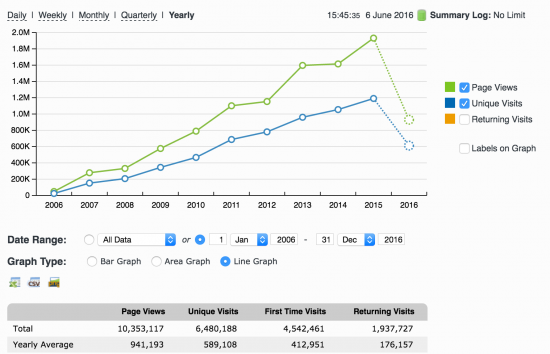 I suspect there may be 4 million words on the blog. But I have never counted. And that does not include comments.

Despite the opinion many seem to hold I have never had grant funding to write this blog. It has played a role in my work, but I have always thought I write it in my own time. That is why so much has been written early in the morning.

Despite that along the way some things published here have gone on to make headlines elsewhere, change laws or international agreements and certainly influence debate the world over. I make few specific claims, but I do think the taxes on corporate profits in all the Crown Dependencies changed because of what I did here. Most specifically, my one person campaign to remove the UK's £200 million a year subsidy to the Isle of Man that let it be a tax haven resulted in its abolition. I may never have such influence on a place again. And I have, of course, used the  blog to promote country-by-country reporting.

Some other victories have, of course, been had. Progress on beating tax abuse has been better than I might have dared hope. Equally, there is a long way still to go.

No less importantly, some friends have been made and kind comments have been offered. Some others have seen fit to offer abuse, ridicule and outright hostility. Such is life: I learned to deal with it because nothing had prepared me for it.

So thanks for your company. Few people have blogged in the way I do for as long as I have. I admit I have enjoyed the experience.

And now, to address the question about the future. Will I be doing this in ten years? Health permitting, I hope so. But things will change,  as they have in the last decade.

The first part worked pretty much as predicted. What I did not anticipate was spending the next near 15 years or so as a campaigner.  I do not regret the interruption, and expect that to be a continuing theme of the rest of my life.

But, somewhat belatedly, and a little to my own surprise, I have become an academic after all,  and I am enjoying it. In fact, whilst I cannot provide details as yet, I expect to increase my academic role, starting in September, although  solely with a  research focus.  I have, as a consequence, and because  I have now begun earning book royalties,  given up the assistance of one of my grant funders by mutual consent, although with an offer that if ever I need support in future they may look on me favourably.

This will, I think, change my approach, whether I intend it or not.  I am now thinking about much longer term research projects that are more theoretical in their nature and, inevitably, academic in their output. That  is what this aspect of my new role demands of me,  and, to be candid, I relish it.  I can assure you that the focus will remain tax, social, accounting and economic reform to relieve poverty: nothing will interrupt that.  How I choose to affect that change may differ though. Right now the concentration that those issues is demanding of me is reducing blog output,  but who knows, this may be a temporary phenomenon.

What I am quite sure about is that separating me from a keyboard ( or a microphone, because some of my blogs are dictated straight to the computer)  is very unlikely.  And nor, come to that, is retirement likely when I predicted.  I was asked to nominate a retirement age recently and suggested 83, simply because that is when I think my father began to slow down a bit, but even then I think that might be a little premature.  There may be time to get that full  planned academic career in after all.

Whatever happens, thank you for your company.  I intend to be back tomorrow,  subject to getting back from Norway on time, because that is from where this particular blog has been posted. I am talking to members of its tax authority on the Transition to Transparency today. And as I am quite sure that invitations like this would not happen without having written this blog I think it fair to say it has had an impact. That was always the intention.