The Treasury published an extensive dossier on the consequences of Brexit yesterday, no doubt at considerable public cost.

In the interests of balance I thought I'd publish my own dossier that is based on something a little more substantial than the Treasury's offering. So I went to Wikipedia and found this:

Whoever you ask the UK is the fifth largest economy in the world. The sources are reliable: don't question the use of Wikipedia on this occasion.

I make the point that whatever data you look at the UK is the fifth biggest economy in the world. And that is after 43 years of EU membership.

How we use that wealth; to whom we distribute it; what investment we make for the future: all those things are open to question. But if we deal in facts the EU has done us rather well, it would seem.

And so I doubled my research budget and checked GDP per head: 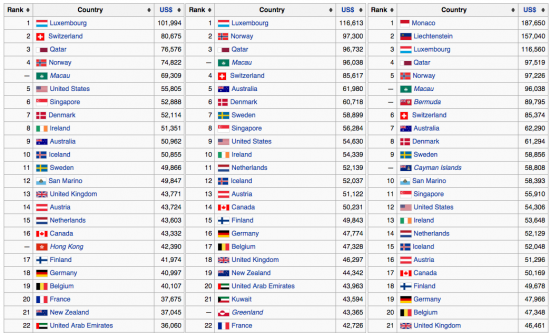 So now we drop as low as 21st, but let's be honest, that's after taking some oil states, San Marino and a massive pile of tax havens where the GDP data is as dubious as can be - and is certainly not available to the local population - into account.

In that case let's just talk the only facts we know. And that is, warts and all, the UK seems to have done rather well as a member of the EU. Which is about all that can sensibly be said economically on the issue.