Larry Elliott has said for the Guardian today that 'the laissez-faire economic model has proved a complete dud'.

Is there an alternative? I'd beg to suggest so. Try The Courageous State: 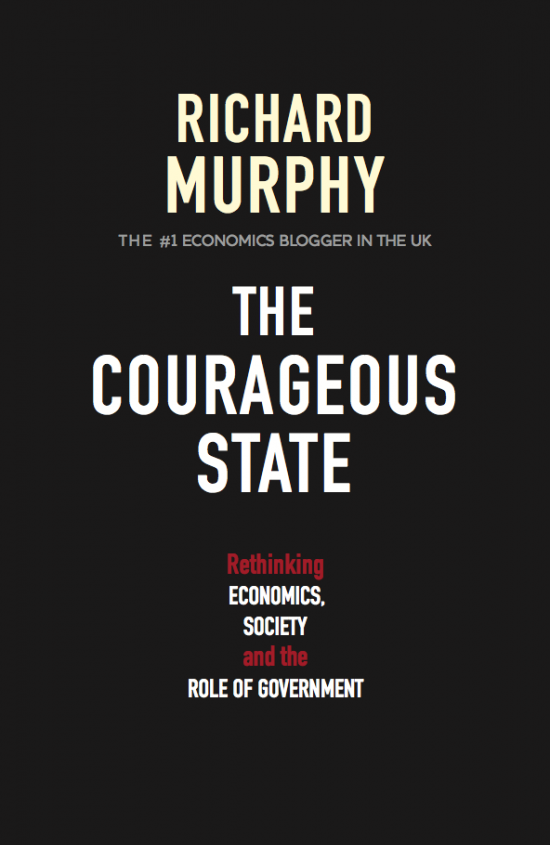 This was my 2011 book, which I summarised as follows:

Courageous States are driven by principles. Of course they’ll also be pragmatic sometimes – politics always is, and has to be an exercise in pragmatism. But principles matter in a Courageous State. This will be a fundamental change that will differentiate them from the neoliberal states they will replace.

Those principles are reflected in the following beliefs:

These are joined by concerns about issues that undermine well-being which the Courageous State will have to tackle:

Concerns not dissimilar to these have, admittedly, been at the forefront of thinking before now: the Beveridge Report settled the five priorities on which in very many ways the post-war consensus was built, saying they were:

As a result, growth, full employment, education, housing and health became the focus of social policy post-1945, and rightly so. They would also be priorities for the Courageous State. They were, however, the goals from an era when poverty was so widespread that what now seems pejorative language could be used to describe the objectives the state set when seeking to improve the conditions of a great many people. Of course they remain relevant: absolute and relative poverty remain pressing issues in the UK, and yet the Courageous State needs to aim for more than their relief. The Courageous State has to set itself the goal of ensuring people’s potential can be achieved. That can only happen if the following are available:

These are the objectives, but objectives require practical policies if they are to be fulfilled. The result is that the Courageous State needs to have policies to:

These are the issues that would drive policy in the Courageous State.

We would not have had a steel crisis if we had enjoyed a Courageous State.