The government function: musings on the optimal size of government

I admit that I am enjoying teaching undergraduate students. The challenge is enormous. Effectively you're trying to convey big ideas in minimum time to people who have had remarkably little training in the subject about which you're talking.

Take macroeconomics. It's a subject few grasp and which some even deny exists. How do you summarise the key objectives?

First, unless you accept that change in outcomes is possible then there is little point in engaging in the study of macroeconomics, which without that acceptance is reduced to the status of observing phenomena.

Second, you have to ask what the motive for study is. I suggest two things. The first is assisting the meeting of need. That is at the core of all economics. The second is the correction of market failure: that is, putting right what microeconomics gets wrong because of the existence of marketplace failures and externalities.

Third you have to frame these issues into meaningful questions worthy of study. I'd summarise all those question in one phrase: how big should government be to effect the change we need?

And since economics without a diagram or two is pretty much inconceivable I came up with this: 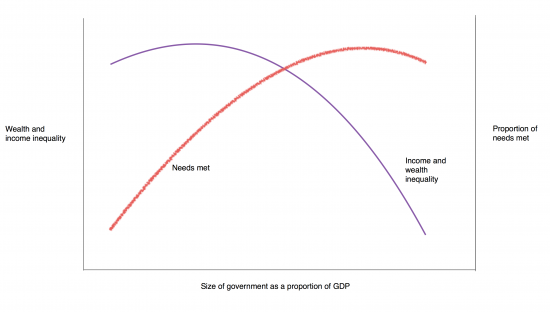 The left hand axis represents inequality; the right hand the proportion of all needs (not wants) met in society. I stress, needs is not a base line here. It is a measure of being able to take a part in society, but without excess. And the X axis is the proportion of GDP spent by the government.

I have sketched in two functions. I stress, I am being simplistic, not least in assuming a single variable for income and wealth inequality. But they will do for now: the shapes are also likely to be more complex than shown.

It's my suggestion that in the first instance wealth inequality might rise as the proportion of GDP spent by the government rises: the power of the state does, after all, reinforce the ability to enforce property claims. But as the state grows in size so too does its ability to find and tax property on which tax liabilities rightfully arise, and so also its willingness to take on powerful vested interests grow. As a result ineuqality then falls steadily. I could have added an upward kicker at the right hand end of this function: very big government (beyond the ranges seen in most democracies) is often associated with corruption that concentrates wealth.

If is, of course, entirely logical for the state to redistribute in this way: because those on lower levels of income have higher marginal propensities to consume than those on higher levels then income redistribution releases funds into the economy that stimulate growth. Given many governments want to deliver growth (although I think they should be careful as to its composition) then redistribution makes logical macroeconomic sense.

As this process of redistribution stimulates growth then we see the second function, on the proportion of needs met, kick in and rise with the size of government. I stress, this does not mean government meets all such needs but it does provide the environment in which they are met.

Again, in a macro sense this is logical: government spending in an economy broadly does three things. First it does, as a matter of fact, increase GDP unless that economy is operating at full physical and technical capacity. Second, government is the prime mover in a lot of innovation and investment. This kicks into growth via increased consumption and, one hopes, exports. And third, some spending is of course straightforwardly meeting basic need and the security that provides means people need to save less, and so spend more, and so increase economic activity through consumption. In a purely logical sense, all components of GDP are likely to rise as a result of government spending.

So what is the best size of government? Logically it is where the meeting of need is maximised so long as wealth and income inequality is still declining at that point (i.e. the kicker upturn I might have included in the wealth function, noted above has not begun, which would indicate trouble ahead if it had).

It's not more than a doodle, but I would not have thought about it if I had not been teaching. And I think there is some merit in it as it answers a pretty fundamental question.