There are two charts in the National Audit Office report on HMRC's abysmal record on estimating the scale of and then tackling tax fraud that tell familiar stories. The first looks at the amount of tax at risk in HMRC prosecutions: 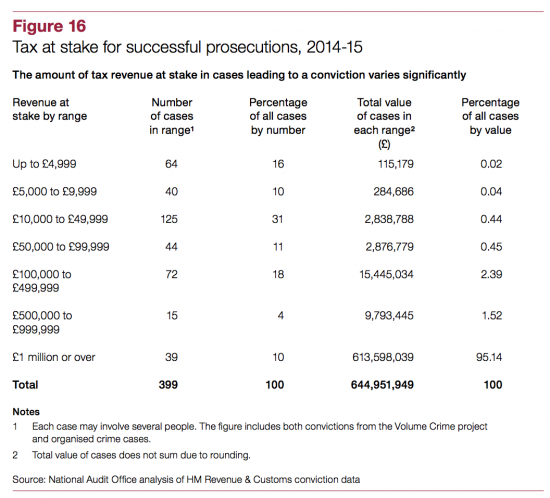 So, what is clear is that 273 cases (68.4%) of the cases prosecuted related to £6,115,432 of cases by value, or 0.95% of the total. Quite emphatically then HMRC go for small fry. Even the National Audit Office say so when speaking of the negative impact of targets:

This led [HMRC] to focus on less complex cases, in particular a large number of prosecutions for evading income tax, VAT and tobacco duty, and lower-value cases. HMRC has recognised that it needs to align the cases it selects for criminal investigation more closely with its analysis of risk and how effective a successful prosecution would be in creating a deterrent.

I bet that does not happen.

The second analysis is the type of tax prosecuted: 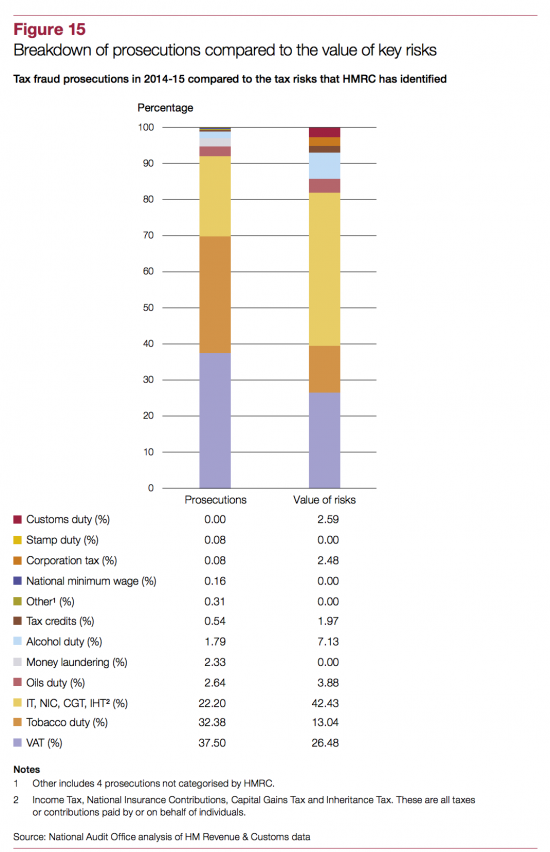 All you have to do is a quick ratio analysis to show how odd the profile of prosecutions is: 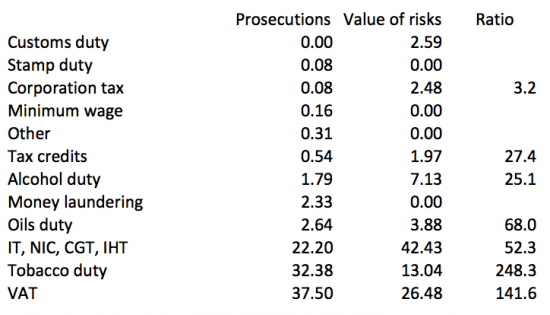 The ratio can't be calculated in some cases, but where it can be is the value of risk divided by the prosecutions to indicate the weighting given to prosecution of the tax.

Guess what? There was actually just  one (I deduce) corporation tax prosecution in the year.

400,000 or so companies failed to even submit corporation tax returns requested of them and yet just one prosecution. There were seven times more for tax credits: no surprise there then.

Instead HMRC concentrated on petty crime. The tax evaders clearly got away with what they were doing.

This is why I get so annoyed with people like John Kay, the FT columnist who said yesterday:

There is plenty of waste and [tax] avoidance — but if eliminating them was painless, it would have happened.

He was talking about the tax gap in general, and to be candid, was blatantly wrong. I'll assume, to be kind, that he has just fallen for HMRC claims that it is trying as hard as possible but what is abundantly clear from this data is that this is a million miles from the truth.  The reality is HMRC aren't even coming close to taking the actions required collecting missing tax revenue in the UK economy. And it is time they did.