I am not a fan of HMRC's plans to digitise tax services. I note I am not the only one with doubts. The Office for Budget Responsibility looks at government plans and attaches a risk rating to them. When looking at this plan they used this model for risk assessment (I stress, this is an example and does not apply to this project fro which the grid is not published): 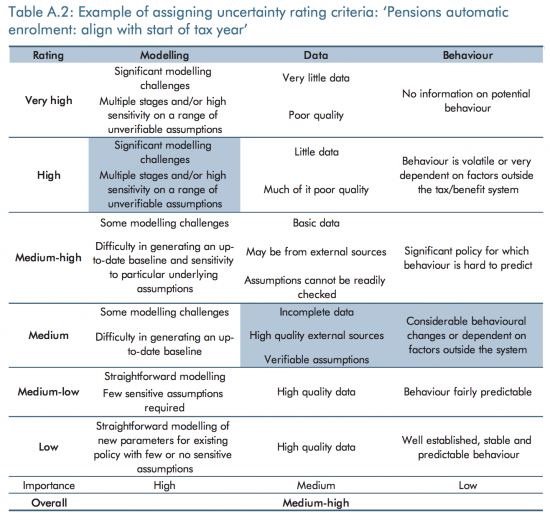 Having used this grid they then commented:

Making Tax Digital: reducing errors through record keeping: This package receives a ‘high’ uncertainty rating. It is an HMRC initiative to interact digitally with small businesses across income tax, corporation tax and VAT, working with the private sector to introduce software that will design out record-keeping errors in taxpayers’ returns. There are uncertainties in the behavioural response and operational delivery. In terms of behaviour, the uncertainty relates to the extent to which the software will prevent errors by taxpayers; in terms of deliverability, the uncertainty relates to whether HMRC can deliver this challenging project in time for the benefits to be realised as scored. Reflecting lessons learnt from previous costings (as described later in this annex), we paid particular attention to the degree of contingency built into the delivery plan before certifying the costing as central.

So, the project gets the second highest risk assessment.

That is unsurprising. Firstly, it is obviously misdescribed: this project is not about eliminating book keeping errors. It is ludicrous to claim that it is. It is about getting data to bring forward tax payments with an indifference to whether the payment demanded is right or not. That is why I so object to it.

The comment on behavioural response is interesting though. I suspect this move will massively increase the attractiveness of the shadow economy. It will significantly detract from the appeal of running a business.

And bluntly, if existing systems do not work (and I have shown to day that they do not) then this one will not either, and the delivery timescale is ludicrously short.

So the OBR are right to worry about cost over-runs.

My only concern is that they have seriously understated the risks because the project has been incorrectly represented to them. And that deception may tell us a great deal about what all this is about.