A number of stories have come out of Jersey in the last day or so that reveal just what it thinks about itself, with some clues being available as to why that might be the case.

First, a story from the Jersey Evening Post that suggests all is not well with perception of the finance industry in Jersey:

ISLANDERS should be celebrating the success of the finance industry and be proud of its high standards and contribution to the economy, business leaders were told this week.

Geoff Cook, chief executive of industry promoter Jersey Finance, said that the way the sector was perceived in the Island was ‘a great source of sadness’, given the ‘huge employment opportunities’ provided.

Mr Cook's sadness appears to relate to the fact that:

‘Most people take their views from often poor negative headlines and since the financial crisis, globally the industry has suffered from a reputational problem.

‘Off Island, Jersey has an enviable reputation with the British government, strong improvement in Europe, across the Middle East, Africa and Asia.

'We have done a lot there to build our reputation.

‘I feel we have got to put more effort into communicating at home.

Maybe those close to home simply know the truth, which is that much that happens in Jersey is a simple charade. It is a game played to pretend that transactions take place and decisions are made in Jersey when this isn not really the case. How do I know that? Well, there was another article in the JEP yesterday, not available on line it seems, that reported a meeting where local EY tax partner Wendy Martin had some interesting things to say: 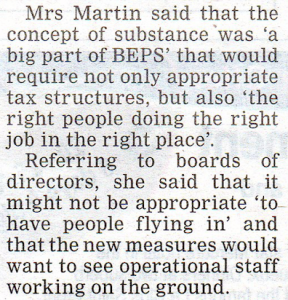 Or to put it another way, people know that right now people are not doing the job they claim in the place they claim or making the decisions in Jersey that are recorded there'. Could anyone feel proud of that? I doubt it.

And is it surprising that Jersey people lack confidence in their primary economic activity? Hardly: in yesterday's Jersey Evening Post there was also an article on education spending in Jersey that reported:

JERSEY is spending less money on education in relative terms than some of the poorest countries in the world, according to a report and UNESCO figures.

Last year the States spent 2.5 per cent of its gross domestic product – the total value of goods produced and services provided in a country during one year – on education.

That figure means Jersey spends less in percentage terms than dozens of countries, including three of the top five poorest countries in the world – Africa’s Burundi, Liberia and Malawi.

The UK spent 6% by the way, as another useful comparison.

What that means is that people can see the games played in their name. They can see that this brings them into disrepute and hardly surprisingly are not enamoured with the consequence of that. And they cannot even see a material benefit.

Is it surprising that Jersey people are not in love with finance? As John Christensen and I have said for a long time,  being a tax haven is tearing the very fabric and soul of their island apart. And there is nothing Jersey Finance can do to change that because they are the problem, and not the solution.