Yesterday proved that cuts are not inevitable

Tax credits were a cut too far. The Lords, the Sun, Labour and his own backbenchers had told George Osborne that was the case. He was forced to believe them. They were a cut too far, they said. And as we discovered, he agreed. He did a U turn. It was not as much of a U turn as many would hope: Universal Credit wills till leave many of those who might have lost out from the tax credit changes £1,000 a year worse off by 2020, but that is not the point of the moment. That point is twofold.

First, we learned cuts can be too extreme. Get used to the idea. A great many things announced yesterday were cuts that will lead to the same outcome.

Second, we learned that there is an alternative to cuts. The detail is in this OBR table: 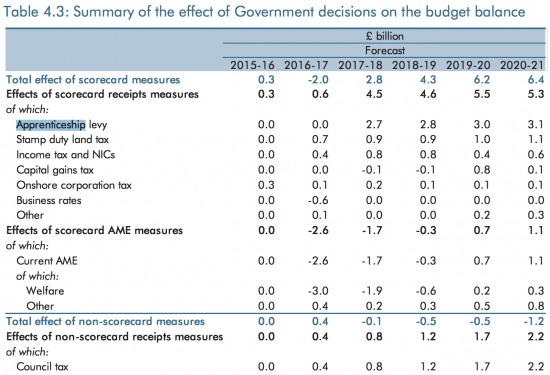 By 2017-18 tax revenues will increase by £2.7 billion from the apprenticeship levy, £0.9 billion form stamp duty and £0.8 billion form council tax increases announced yesterday. Add them up and guess what, they come to £4.4 billion.

Now I think the increase in council tax is deeply regressive and unfair, and the apprenticeship levy not just wholly unnecessary but unwise signalling that training is a burden on business, but that is not the point: that point is that cuts are not necessary and tax can provide an alternative.

Yesterday saw no action on the tax spends Jolyon Maugham and I have been highlighting. But, the reality is that this is where big scope for change exists. And now that the myth that cuts are necessary has been shattered because it has been found that tax is an alternative expect a massive shift in emphasis in coming budgets as all George's plans unravel, as so many have in the past.

The cuts announced are indeed a step too far. But other options are on the table.