George is banking on a credit boom

I have explained the concept of sectoral balancing before. At the risk of repeating myself, what it suggests is that if the government is to run a surplus within the economy then somebody else has to borrow. That’s basic double entry book-keeping at play at a national level. It’s a fact that cannot be ignored or denied. What that also means is that if the government is to clear a big deficit somebody else has to borrow a lot more. I explored this issue in July when the OBR forecast that the sectoral balances would look like this until 2010/21, with useful back data shown: 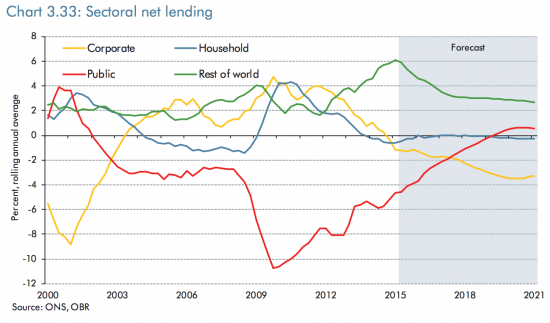 The government deficit was to be cleared then by a massive boost in business borrowing and an equally improbable improvement in foreign trade. Households were going to flatline with no net borrowing.

Now let's move to the November and look at the equivalent chart: 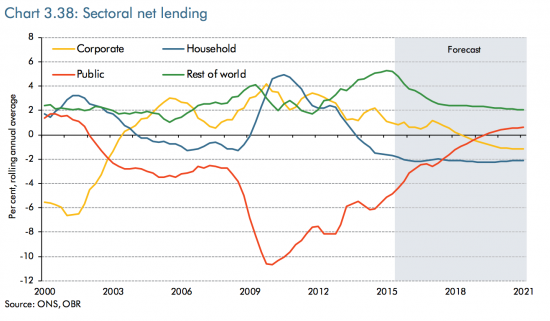 There is, near enough the same red line (although a wobble or two is added) but look at the rest. The changes are staggering.

First, business is no longer going to borrow to invest until sometime in 2018. The boom forecast for 2015 on has vapourised. I happen to think it will in 2018 as well: there is no sign whatsoever that business is going to give up saving either now or in the future: PLC directors seemingly want a comfort blanket of cash to protect themselves from the real world.

It is still forecast, by the way, that there will be massive business investment at unprecedented levels just to get to this level of business borrowing: 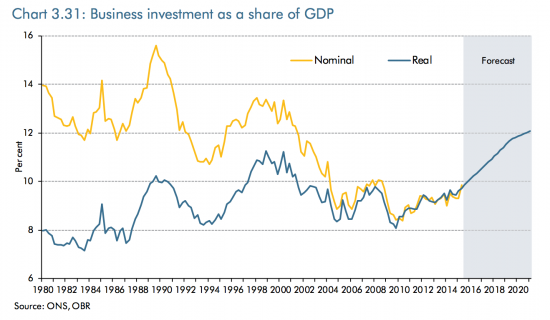 I see no chance of that, but, in recognition of the reality that whatever happens this investment will not be funded by borrowing the OBR has had to make other changes and two things have been reforecast as a result.

First, the already absurd assumptions made about our balance of trade continue, with a little enhancement. If this reflects less money pouring into the London savings market that may be reasonable, but I still see no prospect of trade balances moving as forecast.

But, second, and much more significant is the belief that the UK public will be going on a borrowing binge. In fact, the plan is that we should stedily increase our borrowing to levels last seen around 2008 when consumer excess borrowing helped bring the economy down. 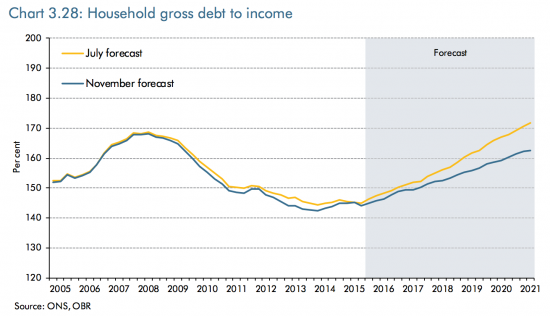 And why is this necessary? Because household incomes are not going to rise by anything like the amount forecast in July: 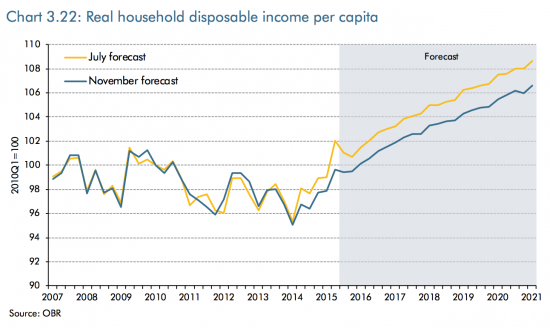 In fact, they're going to grow much more slowly than forecast. And so we're going to have to borrow, a lot. The savings ratio will, in fact, have to dip into record low territory: 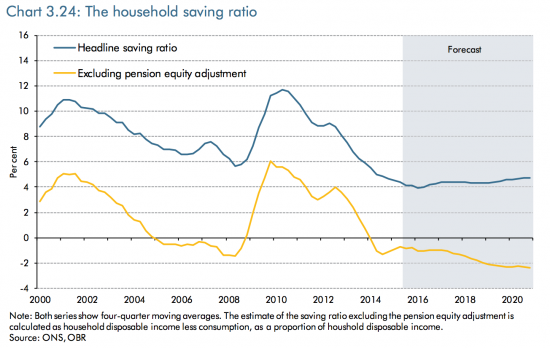 So George Osborne's balanced budget is predicated on a long term credit boom because people are worse off. That's a real selling point for it. And a massive risk for the UK economy as a whole as it enters risk territory with regard to personal debt, and so the risk of default, that is has not really known before.

That's either a scary prospect or a wholly unrealistic forecast.

Worryingly, if trade does not behave as forecast, it could be both.