Are we facing the madness of King George, or just his dogmatic divisiveness?

I had a conversation a couple of days ago with a person who asked if I would be of service to the current government, if asked. My answer was an unambiguous yes, although caveated with two things, the first being my belief that I might have appropriate skills and the second being that I thought the task sufficiently useful to justify the demand on my time. I did, after all, serve on the General Anti-Abuse Rule committee for the last government.

Why say that this morning? Simply because having spent some time, as is my habit at this time of the day (I am writing at 7am) reviewing the morning's newspapers I have a feeling we are currently suffering the madness of King George.

James Guthrie has an article in the FT this morning entitled:

The article, entirely reasonably in my view, objects to the plan now being floated for the government to sell its £44 billion of subordinated debt due by Housing Associations. The only reason to do so would be to get it off the government balance sheet for ideological reasons. The debt would have to be sold at a massive discount as it carries no right to interest. The only way a return could be paid would be by Housing Associations having to pay proceeds of housing sales to bondholders rather than invest in new homes for people who need them in this country.

Politely, this is dogmatic driven madness. As Guthrie concludes, Osborne needs to change his mind, saying:

Don’t be a pea brain, George. Be a Peabody.

Peabody was, of course, the banker who created the trust named after him to house low paid City workers.

Then there is Martin Wolf. His article in the FT has the headline:

Cuts to tax credits are both a crime and a blunder

The best route is to combine a carefully assessed minimum wage with subsidies aimed at supporting families with children and encouraging them into work. That is precisely what the UK had. There is no good reason to throw this away so casually.

I might argue that a basic income would be better still, but the point is that cut away the dogma and someone who is far from a  natural left-winger can see no logic to what Osborne is doing.

Let's move on to another FT piece. This time it is Barack Obama, not all of whose article (especially re TPP) I agree with but where this comment makes complete sense:

Fifth, the world agrees on the need for greater public investment, especially where interest rates are low. That is why I am pushing Congress to create jobs today and tomorrow by adopting a long-term infrastructure plan this year.

In contrast this is actual and planned UK government investment spending over 20 years based on HM Treasury budget reports and OBR forecasts: 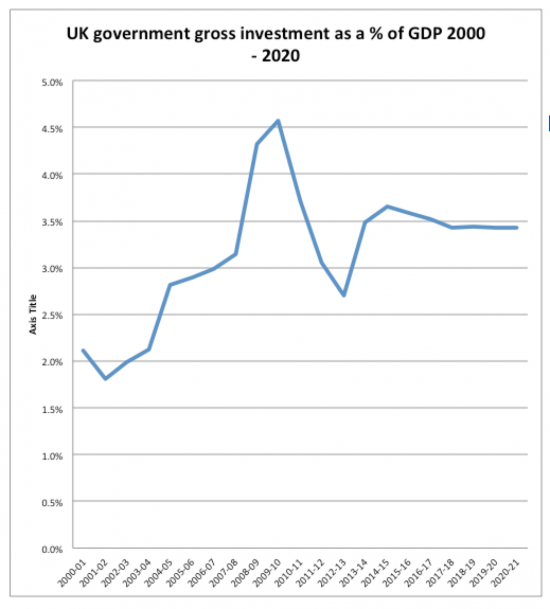 The message is clear: despite economic slack, and despite low interest rates and massive UK spare economic capacity there's no planned spend to boost the recovery here. It's little more than business as usual. And why? Let's go back to Martin Wolf:

There is no strong reason to run an overall surplus by the end of this parliament: at a time of extraordinarily low interest rates, the case for borrowing is strong.

But the dogma rules the economic logic, so investment will be rationed.

And one more example? This from Giles Fraser in the Guardian talking about the Bank of England jamboree aimed at engendering trust in bankers this week in which George Osborne took part. Giles has his doubts. As he puts it:

The purpose of all this touchy-feely openness? To address the widespread worry that the City has lost its social licence

But that licence is vital to George: the City are the people he wants to provide the private debt that will let him repay his own debt. But as Giles says:

In my parish, just a mile or so from the City, the growth industry is still food banks. And until that changes, you won’t find me hugging a banker or praising their social usefulness.

Quite so. But dogma is designed to suggest we should.

And none of this bodes well for the spending review coming up. Are we facing the madness of King George, or just his dogmatic divisiveness? Does it matter if the outcome is the same?

My only comfort is that I am not alone in worrying about the question, and as importantly, the consequences.