I have argued that quantitative easing was life support for financial markets. As if to make the case there is this stunning chart in the FT today: 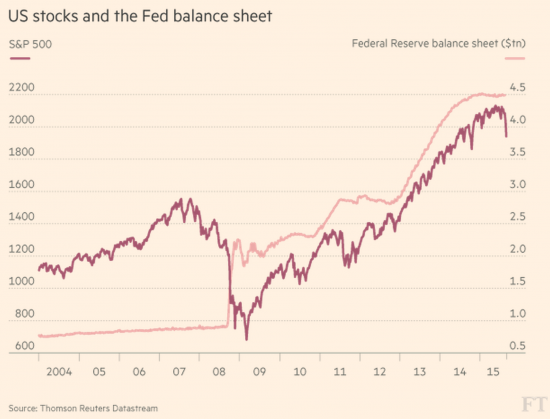 As the FT says of this:

As the chart below shows, there has been a close (if not necessarily directly causal) link between the Fed’s interest rates plummeting to zero, its balance sheet swelling to over $4tn, and the recovery of the US stock market. Of course, quantitative easing has already ended without equities collapsing, but even somewhat higher interest rates will pose a challenge.

I accept the point: correlation is not proof of causality.

But if anyone thinks the injection of funds from the state into banks that were supposedly to be used for loan purposes but where actually used for financial speculation did not give rise to this association then they are going to have to come up with some mighty clever reasoning. I believe the link is very clear and will take a lot of persuading to the contrary.

And given that it is also now clear that, even if we are not facing another immediate recession after this week's financial turmoil, we are facing a period where the expectation of growth fuelled by China is over then the tools to deal with the ramifications of China's economy being in a mess need to be thought about now.

Surely we can't create another stock market boom as a reaction? The evidence is that we've tried that and it has not worked.

So next time what's available? I suggest it is People's Quantitative Easing. We've done life support for financial markets: next time we need to do it for real people.