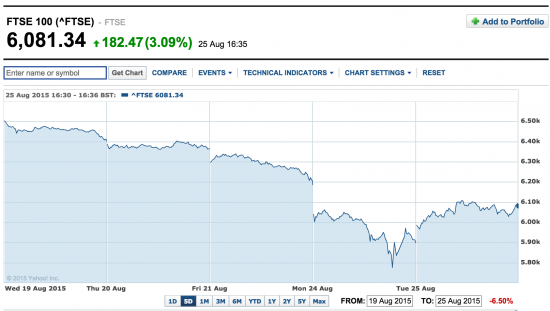 And it looked like Wall Street would do so as well at first, but then it didn't: it compounded the losses ending the day down (source also Yahoo): 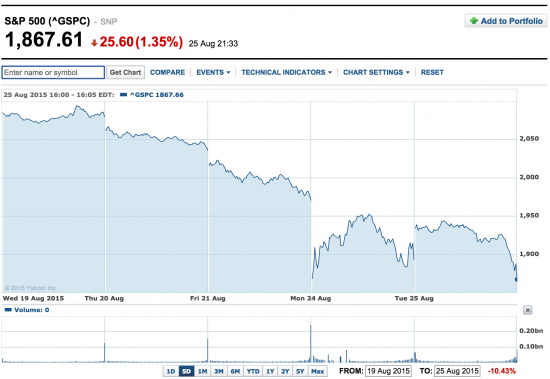 As I write China was looking slightly up overnight, eased, at least in the short term, by falling interest rates . Other emerging economies are not looking so optimistic though. And other news suggests that what is happening is not a blip, but a real issue of deep concern. As Larry Elliott has noted in the Guardian:

It is not just that the growth rate of the world’s second biggest economy is faltering, it is that the quality of that growth is deteriorating.

Mike Riddell of M&G notes that the share of gross domestic product accounted for by investment rose from just over 40% in 2007, to 48% between 2008 and 2013, to 54% last year. A higher investment rate is normally associated with higher growth; in China’s case it has been associated with lower growth.

Riddell’s conclusion is that much of the investment has been wasteful and that China is “trying to hit unsustainably high GDP growth rates by generating bigger and bigger credit and investment bubbles”.

Of all the ways to make an economic crisis that has to be just about the most bizarre, and is the polar opposite of the UK's chosen method, but it is plausible.

And the news is not just bad in China. As the FT has noted:

World trade recorded its biggest contraction since the financial crisis in the first half of this year, according to figures that will fuel a debate over whether globalisation has peaked.

The volume of global trade fell 0.5 per cent in the three months to June compared with the first quarter, the Netherlands Bureau for Economic Policy Analysis, keepers of the World Trade Monitor, said on Tuesday.

This has the feeling of fundamentals coming into play.

China has reacted by cutting interest rates, an option still available to it. But this short term boost to borrowers may just be putting off the inevitable: its economy may really be in a bad shape. The only bright side is that all those new coal fired power stations may not be needed, after all.

And what of the rest of the world? The option of interest rate cutting - the standard response for some decades now to any looming crisis - is not available this time. I do not think anyone is seriously talking about setting negative base rates (as yet, at least). So what are the options? The FT notes that:

Investors believe that the recent market ructions have almost killed off the chances of a Federal Reserve interest rate increase next month, but some big-name industry figures are going even further, predicting that the central bank’s next move will be to restart quantitative easing.

Lawrence Summers, the former Treasury secretary, and Ray Dalio, head of the world’s biggest hedge fund manager, this week indicated that the US central bank should consider restarting its “quantitative easing” programme

So much for all that confident comment from the like of Chris Giles on the FT aimed at me only a week or so ago saying there was no more need for QE now.

And I still should stress that, of course, we may not be in recessionary territory. This may all be a blip. But the fundamentals do not feel like it. Whilst recessions have not historically begun with commodity price falls, as has been happening in response to the current situation, this time it feels different: those falls look like a reasoned response to the market fundamental of falling demand, starting in China and spreading far and wide.

If that is what is happening we will need QE in the UK. But, as I have shown, that can, and I am quite sure should, include People's Quantitative Easing. This idea may be the subject of near perfect timing. By chance, I would add. But that's the way it is in economics.

And this time, if there is a recession, we must not waste it as we did in 2008. Then we did nothing to really reform the economy. This time that must not happen. How to do that is the subject of the next blog.