In The Times this morning: putting the record straight

An interview with me gets headline rating in the Times (paywall) this morning: 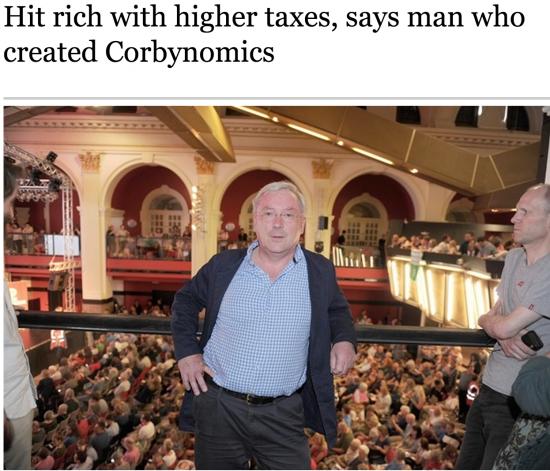 Predictably that was not what I said, of course. But much of this is accurate, even if the spin on it is not:

A new wealth tax should be levied on the assets of the rich as part of a campaign to make the well-off pay their fair share, Jeremy Corbyn’s economic guru has said.

Richard Murphy, who has been credited with creating the “Corbynomics” behind the left-wing MP’s Labour leadership challenge, also said that big companies should be hit by a 5 per cent rise in corporation tax and banks should have to pay as much as 30 per cent.

That's stuff that is in The Joy of Tax (forthcoming) and is consistent with what I have said for a long time: no one should be surprised.

Mr Murphy, an accountant and tax campaigner who has provided Mr Corbyn with his main economic ideas, said that the Islington North MP’s surprise success in the leadership race may indicate that the Thatcher era was drawing to a close.

His comments come after Mr Corbyn described a wealth tax, levied against a person’s entire assets, as a “prospect worth doing”. He has also said that he believed that many of the well-off would be “quite happy to pay more tax”. While a wealth tax is not officially part of Mr Corbyn’s economic plan, one of his aides said that he listened carefully to any proposals Mr Murphy championed.

Mr Murphy, who made clear that he was not speaking for the MP, warned that the City had become a “state within the state” that had held power over politicians for a thousand years. He said that there should be tougher criminal penalties for bankers who were caught breaking the rules, adding that as much as £20 billion could be raised from a transaction tax on high-frequency trading.

They also noted that I said:

“[Mr Corbyn] knows full well I have worked with other politicians and other parties.”

He said that the idea of a wealth tax had been made possible in the past five years by new tax transparency rules making it hard for UK citizens to hide their assets.

At least the first £1 million of someone’s wealth should be discounted from the tax, as well as pension pots, he said.

“Do I think it’s desirable? Yes, I do. “[A wealth tax] has to be 1 per cent or less . . . I wouldn’t necessarily exclude private companies and private shares. I don’t see why companies don’t become of public concern.”

Mr Murphy said that threats by the very wealthy to leave the country to avoid taxes they did not like never materialised.

Corporation tax should be set 10 per cent higher for banks, meaning that they would pay a 30 per cent rate, he added. “The licence we give them to run a bank literally lets them print money and yet we have not asked for an exceptional rate of tax as a result.” Big businesses should be 25 per cent, he said.

The rest is, I am afraid behind the paywall.

But let me be clear why I say this, because that's what is important and did not get noted, although in a 90 minute interview it was explained.

First, there is a pressing need to reduce inequality in the UK. The IMF and OECD agree: this is a massive issue for our times. We have to ensure that the barriers that the current distribution of income and wealth create are reduced if all are to have opportunity in this country. And we also have to break these barriers down because so much wealth is held by a few and they tend not to invest for productive purposes and nor do they take risk: their choices are defensive to preserve their position and the result is that the UK's entrepreneurial economy is losing out badly as a result for lack of capital. Only by redistribution can the spirit of enterprise, backed by sufficient capital, be really set free in the UK.

As for companies: note I said large companies and I referred also to banks. I have suggested that George Osborne is going to give a £27.8 billion tax break to big business over the next five years. I cannot see that paying any return to the UK at all. UK big business does not need tax breaks to invest: it is already sitting on piles of cash and has access to very cheap money, but has for more than a decade in net terms hardly borrowed at all. The real problem of the UK large corporate sector is it won't invest or can't think of anything to invest in. In that case it needs to pay tax to make sure that investment can be funded in other ways.

And as for banks there are good reasons why they should pay more in tax, and George Osborne is recognising this, so it is hardly radical to say so. First it is because they get massive state subsidies e.g. in the form of deposit guarantees for those who save with them. Second, it is because we quite literally give them a licence to print money from which they make large fortunes. And third, it is to recoup the gains the made from conventional QE whilst a financial transaction tax is all about making sure we reduce risk in the City. We just about afforded one bail out: we do not want to go there again.

So this plan is not about hitting the rich: that's a silly and inaccurate headline. This is a plan to reduce risk, to balance tax contributions, to release funds for investment, to ensure that all get access to opportunity and to encourage the desire of the UK business sector to innovate and to create real wealth. I think 99% of the people in the country will get that.