The criticisms of the People's Quantitative Easing idea by Ben Chu in the Independent and in the Economist. These seem to come down to the following issues:

1) Why not just borrow from the markets?

2) It may cause inflation

4) It did not work in Venezuela.

I should add, however, that Ben Cu agrees that:

a) There is a need for new investment

Let me deal with all these issues since it seems important to do so.

First, let me contextualise this. This is a summary of the July 2015 economic forecast for the UK as summarised by the OBR: 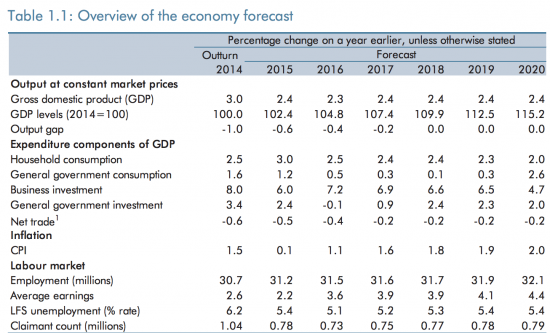 There are three things to draw out of this:

I accept that the forecast on falling government investment is real, and may not even reach the levels noted. 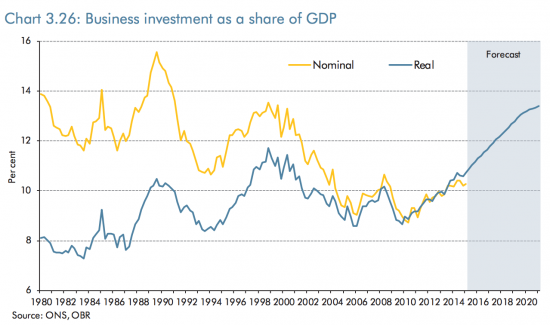 Real investment by business has, to make the economic forecast work, have to reach unknown record highs. To achieve this business has to borrow heavily. The sectoral lending balances show this: 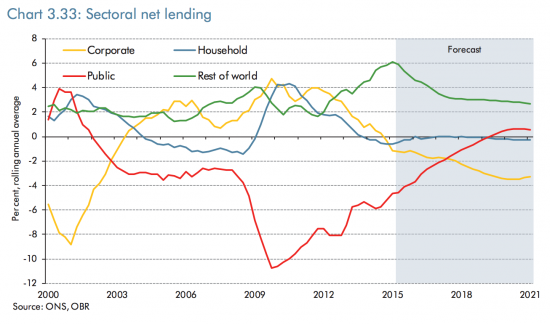 What this means is that moving from a position of net saving business is apparently going to move to borrowing maybe £60 billion a year, or a little over £300 billion over the period (table 1.10 in supplementary economic tables, here).

And this is the data on household borrowing: 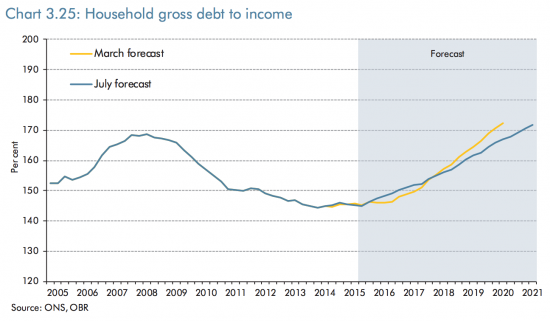 I will be candid, I think that  these forecasts are utterly implausible.  In particular, I cannot see any reason whatsoever why business should invest in the way that is forecast when this is contrary to all recent past trends and nor can I see the enormous increases in household borrowing arising unless there is a massive house price boom despite restrictions on tax relief for by-to-let borrowing and the substantial difficulties most younger people are facing getting onto the housing ladder. But  that being said is forecast to indicate that:

a) The economy can absorb investment of more than £50 billion a year, and

c) Not suffer an increase in inflation in the opinion of this government.

In reality  I accept the first of these,  think that the second is too high to be realistic,  and think that if a more realistic figure of money creation was substituted then it is true that the risk of inflation will be limited precisely because even at the end of this period I suspect there will be net under employment of labour in the UK and continuing poor productivity.

Using this background data on the capacity of the UK and the potential borrowing risks it faces let me answer the questions.

Why not just borrow from the markets?

There are at least three totally reasonable answers to this question.

The first is why do so when  Peoples Quantitative Easing avoids a real interest rate charge arising? What is the point in making such payments when they are not necessary?

Second,  if George Osborne is right in his analysis then there would be no capacity to borrow (as the sectoral balances indicate) but there would remain, as is clear from the lack of forecast govern investment  a need for that investment to take place. In that case People's Quantitative Easing would be the only option available for funding this investment.

Third, why over heat the economy with more debt when it is obvious that this has caused financial crises and the government may need that capacity in reserve to deal with any financial melt down, the prospect of which looks very high if anything like the increased forecasts in debt were to occur?

Will it cause inflation?

Inflation happens, according to the quantity theory of money when (in broad summary) the amount of money increases faster than underlying economic activity.

I am bemused how PQE funding of, say £50 billion a year over a few years, could give rise to inflation when, apparently the economy can absorb £1.1 trillion of new money created by bank lending over the same period. This simply makes no sense at all. PQE created money has no more, and because interest need not be paid, may well have much less inflationary effect than privately created money and yet the focus is being given to PQE funds. I cannot see why. Worse than that, I think the suggestion is just wrong, most especially if, as seems certain these OBR forecasts are as wrong on growth as all that have gone before them have been but we do have the real under-utilisation of capacity in the economy that they imply.

Let's be clear about this: if the governor of the Bank of England does not like what an elected government wants to do then he has to go. If anyone is suggesting otherwise would they like to suggest what form of government we have in this country?

And if they also think that Bank of England independence means it can act above and beyond the will of parliament likewise can they say what they think that also means?

So, in my view if Mark Carney does not like the plan for People's Quantitative Easing if it were ever to come to pass my answer is that he should then apply for a P45 and a job vacancy will be advertised.

And might I at the same time counter the nonsense from both Ben Chu and the Economist that if people thought that the Bank of England was not in charge of inflation policy then inflation will become rampant? First, I would wager that the vast majority (well over 99% of people) in the UK have no clue that the BoE has such a responsibility. Second, if those who do really think that such decisions are wholly uninfluenced by the Chancellor of the day then I very politely suggest that they have suspended their disbelief in ways that our counter to sound analysis. I am quite sure that it does not happen like that, whatever the rules might say. The fact that the OBR is forecasting rate rises at the end of the year is, for example, the surest indication from the Chancellor to the BoE as to what they might do. Let's not pretend otherwise.

And finally, no one is saying that this puts the BoE in charge of investment policy. It is just the purchaser of debts, as is the ECB right now to the tune of â‚¬60 billion a month. The decisions on how the money is used will rest solely with the government. The BoE is simply acting as a bank, providing funding for that purpose in a way that Mark Carney and Mario Draghi have both said is technically and legally possible.

And nor is that monetary policy. It may well be sound fiscal intervention in an unconventional wrap to reflect new understandings of how money, debt and accounting really work but it is far, far removed from monetarism and the absurdities of things like helicopter money.

It did not work in Venezuela

I will not stop to the Economists depths of desperation to answer that one.

a) exploits the capacity in the UK economy

d) is realistic in what can be delivered, unlike Osborne's hope for business investment

g) has no net interest cost

NB: Repetitive trolls will be deleted if they try to comment. I am only interested in serious debate.